Kitchen Inspire Measuring Jug – a jug by any other name 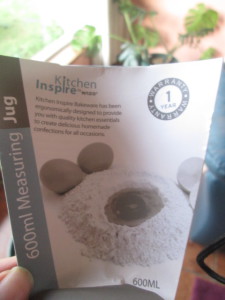 Recently I needed a measuring jug, I wanted to bake a special Lynn Bedford Hall recipe and couldn’t find my Tupperware quickshake with the accurate ml markings on it.  The recipe calls for 100 ml liquid (this is a very specific requirement or 125ml, ½ cup would have been called for instead), and 200 ml brown sugar. In most cases when baking I find that it is imperative to use precise measurements.

I went to Pick ‘n Pay and bought the Kitchen Inspire Measuring Jug.  Previously I had a Fire King, glass measuring jug which was about 50 ml out, I kept it as a general purpose glass jug but it led me to be wary of the accuracy measuring jugs. 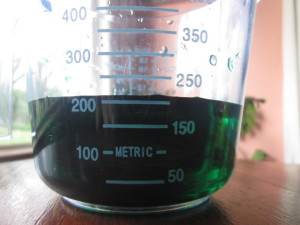 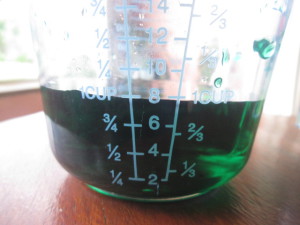 Before using the new jug I checked it using 2 different accurate brands of measuring cups at home, both indicated that the new jug was not accurate.   I added green colouring to the water to indicate the water level.   On one side of the jug the measurements are shown in cups and oz, on the other side in ml.  Even if my measuring cups were wrong the jug contradicted itself.

Via their Facebook page I sent Pick ‘n Pay a message, drawing their attention to this.  They reverted to me with this message “Hi Ursula, we addressed the matter with the supplier who tested a jug and found it satisfactory. Please advise if you would like to return it to the store.”  This led me to doubt whether the way that I had tested the jug was accurate. 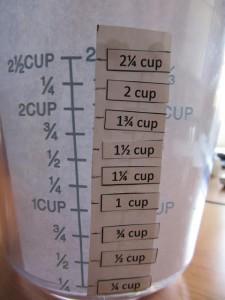 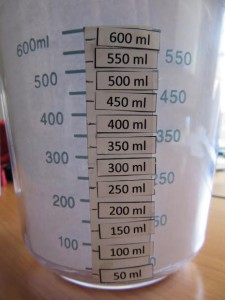 My husband is an engineer, I asked him to take the jug to work where they have scientific marked beakers.  He used the beakers, and placed the correct markings on paper which he then photographed for me.

I then e-mailed the above images to Pick ‘n Pay, that was on 28th May, and I haven’t heard from them since.  I guess they just hoped that I would return the jug, go away and forget about it.  I find that very hard to do, quality matters to me, it also matters that other people don’t buy what is effectively a faulty product.  This is not a milk jug, an ornamental jug or any other type of jug, it is sold as a MEASURING jug, I expect the measurements to be accurate.  Am I being difficult, pedantic and unreasonable?  You tell me.

I would love you to comment below and tell me if you agree with Pick ‘n Pay that this is “satisfactory”.

“It would appear that for some reason, a shipment was produced using the US Measuring Scale on the “Cup” side.

Until now, neither us, nor the supplier were aware that there was a difference in the cup measurement between the USA and RSA.

I sincerely apologise for this lapse.

The factory will in future perform a more effective QC with all of our orders.”

That still doesn’t explain why the ml markings are inaccurate but I’ve expended enough time and energy on this, bored now.   Will return the jug and not buy the brand again, bottom line – Chinese crap

I expected more from Pick ‘n Pay, along the lines that the wrong jugs would be removed from the shelves, “thank you for drawing this to our attention”, give the customer a sense that they have been heard and input  is valued.