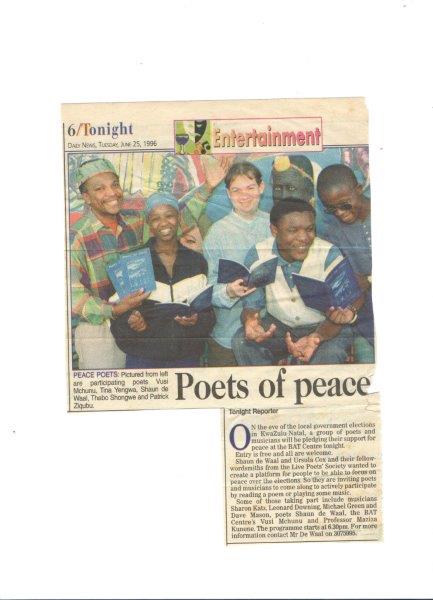 A while ago I wrote a piece about the Durban Live Poets Society (LiPS) which I started in 1994.  The group is still going strong and will hold another meeting this wed, 1st October.  They meet at A Novel Idea in Westville on the first Wed of every month.  This is the biography of Shaun de Waal who sadly passed away some years ago.  Shaun was dedicated to the art of poetry and did so much to create awareness and enthusiasm.  I will never forget his Poetry for Peace initiative.  This biography is courtesy of Victoria Pereria to whom Shaun bequeathed his poetry.  Shaun and Victoria were members of the group from the beginning, and were very much part of the dynamic core which carried LiPS into the future.

Shaun did the Matric at Marist Bros in 1976 and passed with a higher grade pass. After doing his army

service he worked in the Post Office and Community Development Housing Department, in a clerical

position. He then joined the Natal University of Durban and availing himself of the facilities offered for

further studies, he graduated with a B A Degree majoring in Education and Biblical Studies. He then

obtained a Teachers Diploma from London Montessori Centre. He travelled extensively in Europe

and America making contact with Educational Systems and Associations. He was voted International

Child Care Worker and appeared on SATV on a questions and answers programme, directed mainly

In 1993 he started writing poetry and gained recognition on the SA scene. He received an International

award in 1993 for poetry published in America. Lifetime membership of the International Society

of Poets based in Washington DC followed. He is a songwriter and is a lifetime member of the

Songwriters Club of America. He lectured part time on Creative Writing for the Culture and Working

Life Unit at the Natal University. One of the initial members of the Live Poets Society, he is a

“Poetry for Peace, aimed at reconciliation work with communities in South Africa.

He has written numerous poetry books such as Healing Africa, Music in the Earth and A World to Live

In, Dreams Bright Feathered, Secret Legends, The Garden and Palace of a Forbidden Place and My

Life as a Poet. His latest, First Thunder Then the Morning Comes, was completed just before his death.

As there was another writer using the name Shaun de Waal, he wrote under the penname of Michael

1999. A certificate of Merit was awarded to him for outstandingly good work in Project Management

and Evaluation in 1998. The School of Architecture, Planning and Housing awarded him a prize for the

Best Dissertation during the Academic Year of 1998.

He was compassionate, caring and unselfish in his devotion to others, he wanted people to be happy.

He believed that there must be no fear in death, because you are going home to a universal symphony

of welcome that life has been.

(NB: The above was prepared with the help of Shaun’s family and friends and was read at his memorial)

Surprisingly, on his will, Shaun left all his works under my care for promotion and to be used in workshops with

youngsters. Shaun was very involved in children’s development through education and story telling.

Unfortunately years went by before I could seriously look into it to see what could be done. When I did go

through all he had left I was impressed. It includes books that he printed himself, stories and poems, also letters to

people all over the world – one to President Mbeki.

Nise Malange , also a poet and writer, administrator of the Bat Centre, knew him well – together they

He also compiled ‘Radiance’, a collection of poems by Durban poets offered to Queen Elizabeth II of England,

His last work shortly before his death called, ‘First the Thunder…then the morning comes…’ includes prose

and poetry and in it he describes the beginning of his ordeal with cancer, his spiritual journey.

He wrote under the pseudonym, Michael Morain.

His works can be divided as follows:

A World to Live in

Music in the Earth

The Garden and Palace of a Forbidden Place

My Life as a Poet

Poetry for Peace – together with Nise Malange

In his early twenties Shaun became involved with the Rosicrucians and later with the Free Masons for some time. He was around 18 years old when he did the Army, and then he went overseas, to England, Europe and then America. Brought up as a Catholic, his sister remembers him as always kind and placid and very keen to be of help. He never met his father as his mother divorced when he and his sister were very small, and they never saw him again or even knew anything about him, let alone his whereabouts.

Shaun seems to have loved some woman here in Durban, but she seems to have let him down. His sister says that he was basically a loner. When young he wanted to be a Catholic priest. Once he did share with her, some vision of a man dressed in white who had come to visit him. He mentions in his writings a ‘meeting’ with Saint Germain and Victoria remembers that he spoke a lot about this ‘ascended master’.

One day Shaun phoned his sister and just said,

And he never complained!

Peace to his soul!

Like Loading...
2014-09-30
sula 1968
Previous: Torn between the beauty of Africa and Ellis Island
Next: The Old Transvaal Inn, food, books and encountering a kindred spirit