The History of LiPS – Brett Beiles at the helm 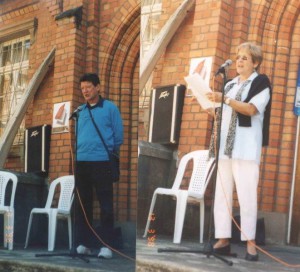 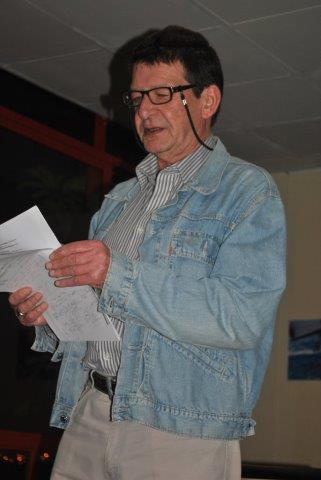 A while ago I wrote about the formation of Durban’s Live Poets Society (LiPS) and my time with the group. I asked Brett Beiles to write about the years when he took the reigns. This is his story.

Poetry helps to concentrate the mind, crystallise emotion and distil the spirit. These processes make us more aware of ourselves and our actions, and more mindful of others. This leads to greater understanding, empathy and compassion – which are surely what all reasonable people desire. In other words, a better world.

That’s what I believe, anyway, and it was for those lofty ideals that I agreed to succeed Jillian. Besides that, I had little better to do at the time than keep reinventing my CV with the hope of one of the versions appealing to a prospective employer.

Tie that Binds
As Sula and Jillian have already mentioned, LiPS’s ongoing challenge was to find a permanent ‘home’. Although I’ve never been a traditionalist, I suspended that prejudice and throttled myself with my ‘old school tie’ on this quest.

Peter Adams of Adams Books had been in the same year in the same school as me. We were even in the school tennis team together. And now decades later his Musgrave Centre branch had a very gemütlich coffee shop which I thought would be perfect for our gatherings. For good business and PR reasons, he and his staff agreed that our partnership might be symbiotic.

Apart from occasional book launches, when else would Adams have 50-odd literati in its premises at the same time! That’s what I promised him, although we’d seldom attracted that many to a meeting before. We were given three months’ trial to make good on that.

Hype-Hype …
So now I had to use my journo and advertising connections to generate publicity. Roots Advertising kindly designed posters for us, The Hardy Boys Advertising generously printed them, and I hung them in libraries, universities, colleges, galleries, theatres and any other temples of culture that would have them. Newspapers and magazines were also unstinting with free publicity. After all, this was something of an event – a Durban bookshop ‘permanently’ hosting a poetry group.

On the rare occasions when LiPS’s meetings had enticed large numbers, they had been when ‘added value’ was offered – such as a guest poet of note. I decided to make this a regular feature. Dennis Rubin – the playwright, director, actor, author and poet – graciously agreed to be our first guest poet at Adams. Since then many of the country’s top poets have graced our meetings.

Baptism by Furore
Dennis’s popularity and the publicity for LiPS’s ‘relaunch’ just about generated the number required, and then a Daily News columnist unwittingly did us a great favour. He lambasted LiPS for meeting on a Wednesday night in what he called ‘white’ Musgrave Centre when we should have known that another poetry group met on the same night in the ‘black’ BAT Centre. His convolution of non sequiturs concluded that President Mbeki was correct about our country comprising two nations. Huh?

Had that firebrand done his homework, he would have learnt we had long met on a Wednesday – long before that other group formed. They had chosen to poach ‘our’ night. The happy outcome of the furore that erupted was that the membership of both groups was boosted. (Unhappily, Dennis – and that columnist – are no longer with us.)

Born Again Society
To attract younger members, The Live Poets’ Society also needed a personality. It needed branding, if you’ll excuse marketing jargon from this ad-hack. As contemporary as the group’s name may still have been when Sula founded it (because of the 1989 film) many of the newer generation didn’t ‘get it’. The word ‘Society’ smacked to them as something dull, dry, dreary – even when qualified by ‘Live Poets’.

So the backronym LiPS was born, with members known as LiPSomaniacs. And credit is due to the LiPSomaniac Alex Sudheim who coined the term Poet Pourri for our open sessions. Thanks are also due to him for being one of the first journalists to publicise our transition – in the columns of the Mail & Guardian.

A New Berth
Our three months’ trial period at Adams was extended to a year-on-year agreement. But after three years Adams’s staff had to call it a day. Their long hours were taking their toll, not only looking after us after closing time but also having to attend to ever-mounting book launches and publishers’ promotions in addition to their ‘day jobs’.

So we were almost on the streets again. Fortunately a long-standing colleague came to the rescue. Lylie Musgrave and her husband Bill were senior members of the Point Yacht Club. With their influence we moved to the club’s comfortable functions’ room called The Quarterdeck which overlooks the harbour with its ‘Steel Giraffes’, as Douglas Livingstone called the cranes there. Ironically, it’s just a pebble’s skip from our brothers and sisters at the BAT.

Passing the Torch
During my time as Convenor, LiPS was represented at the Poetry Africa Festival as well as the Gateway Theatre of Shopping Poetry Festival. We were paid for those appearances. I gave half the money to the performers and deposited the other half into LiPS’s bank account. More on our funds later. I also twice convened the poetry segment of the Mariannhill Monastery Easter Arts Festival in which LiPS members appeared. That was done for love, not money.

After assuming the LiPS hotseat through having time on my hands, one of those inventive CVs, mentioned earlier, did its job and I soon found myself with more than a full-time job. As I couldn’t do justice to it while giving the same commitment to LiPS, I ‘advertised’ amongst members for someone to relieve me.

There were two ‘applicants’, but one wanted to move the meetings to his house. Ample and welcoming as it is, I knew from experience that meeting in a private residence wouldn’t work for long. So I was thankful that John Ballam took over, but not for long.

Excuse my French!
He arbitrarily moved our meetings to Alliance Française, off Windermere Road, who after a few months gave us notice, so back we were on the streets. When that happened John resigned and appointed Danny Naicker as his successor. John has never been seen since.

It was embarrassing going back to the Musgraves to ask them to use their influence to get us back into the PYC, but that they graciously did. Sadly, Bill’s death shortly afterwards coincided with the PYC being taken over by new management who wanted to charge us an exorbitant sum.

For Art’s Sake
Art gallery owners Karen and Claus Bradtke learnt of our plight, thanks to the efforts of long-term member Deena Padayachee. They offered us a meeting-place in one of their art galleries, The Collective in Florida Road. This worked well but after a year it had to close. Generous as ever, the Bradtkes then offered us space in their other gallery ArtSpace, off Umgeni Road.

Opening night there brought a full house, but it comprised almost exclusively of the guest poet’s entourage. They had never been to previous meetings and have not returned. Over the years this has been a depressing feature of many guest poets and their fans – here tonight, gone tonight.

Sadly there were ever-dwindling turnouts at successive meetings, it’s thought because of the location. Many members feared going to that dingy street downtown, especially at night. We didn’t have to look far for an alternative.

The first guest poet there was Kobus Moolman. There was standing room only, no doubt due to Kobus’ renown. Over the years he has been a good friend of LiPS, presenting most of his publications at our meetings.

He and many other guests with publications have donated a copy of their latest work for us to raffle towards funds. Another source of funding is a discreet donation box. We don’t embarrass people by passing it around.

The funds are intended for the publication of an anthology of members’ and guests’ poems over the years. The group has survived a rollercoaster ride for almost 20 years. May we continue to thrive at least long enough to have sufficient money for Read Our LiPS to be published.