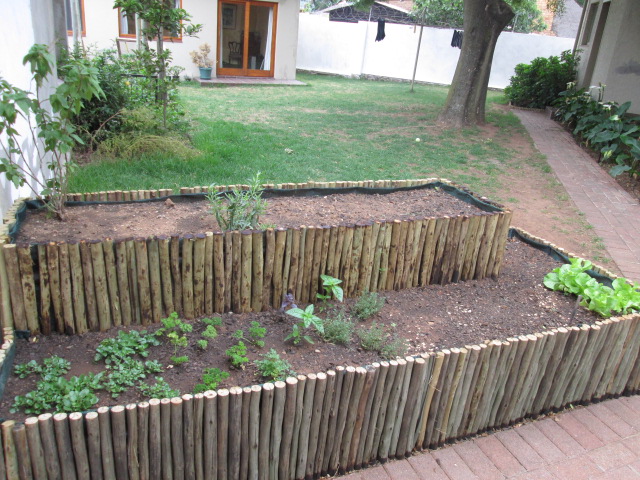 I am blessed to have a husband who not only works hard to maintain our home but also loves gardening.  I asked him to write this for me about the herb box which he built.  It still needs more herbs but it’s great to have space to plant more.

Our original herb box which is separate from our vegetable garden and closer to our kitchen is about 6 or 7 years old.  I cannot actually remember when I built it.  Similar to that shown here, it consisted of two tiers approximately 500 and 800 mm above ground level and was constructed from panels consisting of vertical Eucalyptus laths (of the type used widely in thatched roof applications) nailed to thicker, horizontal Eucalyptus poles.  The overall length was 2.5 m and the width 1 m, with both tiers being 500 mm wide and the bottom tier extending past the top tier which was about 2 m in length.  I recently needed to repair and paint a section of garage wall adjacent to the one end of the herb box and so emptied the soil out – although this seemed like a big effort at the time,  the herb box also needed to be slightly realigned as it was leaning slightly to one side.  This also required it to be emptied.  Additionally, emptying and replacing the soil would allow me to improve the soil quality by digging in compost and thinning out some of the herbs (i.e. the mint and tarragon) which had taken over to an extent.  Unfortunately what seemed to be a big effort before starting out turned out to be quite a huge effort in the end. On removing the soil I discovered that the parts of the laths between the top and bottom tiers that we effectively buried under soil had rotted away and so a rebuilding process was initiated.  Even this turned out to be much bigger than I originally anticipated as I also removed and replaced the worst of the cracked laths (about half) making up the other panels making up the box.  The height of all the panels was also shortened slightly by about 5 cm in order to cut away the rotted ends of the laths that had been in contact with soil at the bottom of the box, and most of the horizontal support poles were also replaced.  These were not replaced because of rotting wood, however, but where necessitated by the removal of the 5 cm at the bottoms of the panels and also because the top support poles were too close to the top of the box and thus not hidden below soil level when the box had originally been constructed. 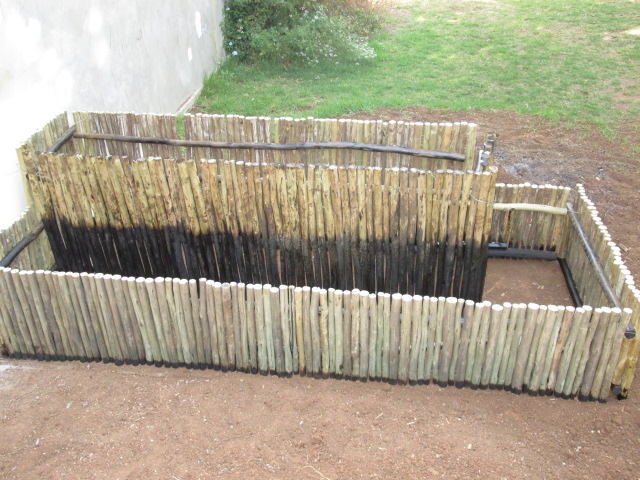 Another major and extremely messy part of the process was the treatment of parts of the poles with creosote.  The horizontal supports and exposed bottom ends of the laths were all painted with 2 to 3 coats of creosote, and the parts of the panel between the upper and lower tier that would be below soil level were more effectively treated by heating the poles overnight to a depth of about 40 cm in a small drum containing creosote.  As can be imagined, a lot of creosote was required and a big mess resulted. There was also a considerable amount of cursing during the whole process which continued over a a few days.  And evenings.  I was hugely relieved when the last of the creosote dripping poles had been wiped cleaned, the drum emptied and cleaned  and all the rags and creosote properly disposed of.  Even more relieved of course when the entire box had been reassembled and I could start refilling it with soil (a job which now felt like a walk in the park).  Nailing of laths, which at their best are not very straight, to poles which are also never straight is not exactly an easy process either, and Sula can attest to some of my comments that cannot be repeated here.  The only thing comment I can repeat is “this is not woodwork, this is stick-work”.  (I enjoy woodwork, I do not enjoy stick-work!)  If I ever attempt a similar construction in future from scratch, I will use support pieces of timber which have been cut square (and properly treated afterwards of course) – that will make things a lot easier. 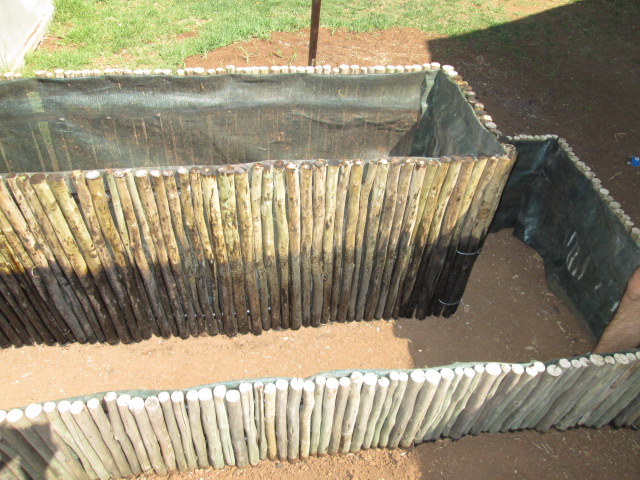 When I first built the herb box I was unable to find “weed cloth” which I wanted to line the box with to prevent soil from washing out between the laths – I thus used shade cloth instead.  Before replacing the soil into the re-assembled herb box this shade cloth was stapled back into position.  We did not want to wait an extended period of time for the soil to settle naturally before replanting, so I used a lot of water to help pack the soil tightly into the box while refilling.  Acacia thought this was wonderful and spent ages playing in the muddy mess – trust me, an Acacia in a muddy herb box is even happier than the proverbial pig!  Although only 5 cm shorter than the original herb box (and somehow slightly wider because of the way in which I joined the panels this time around), Sula feels much more comfortable working in it – the bottom tier is now about 450 mm high and the top tier 750 mm above the ground.  The replanting process has started and more herbs still need to be procured, but in another month or 2 it will be a beautifully established, flourishing herb garden supplying most of our needs.  Sula will update this post with details of the herbs and other plantings along the way.