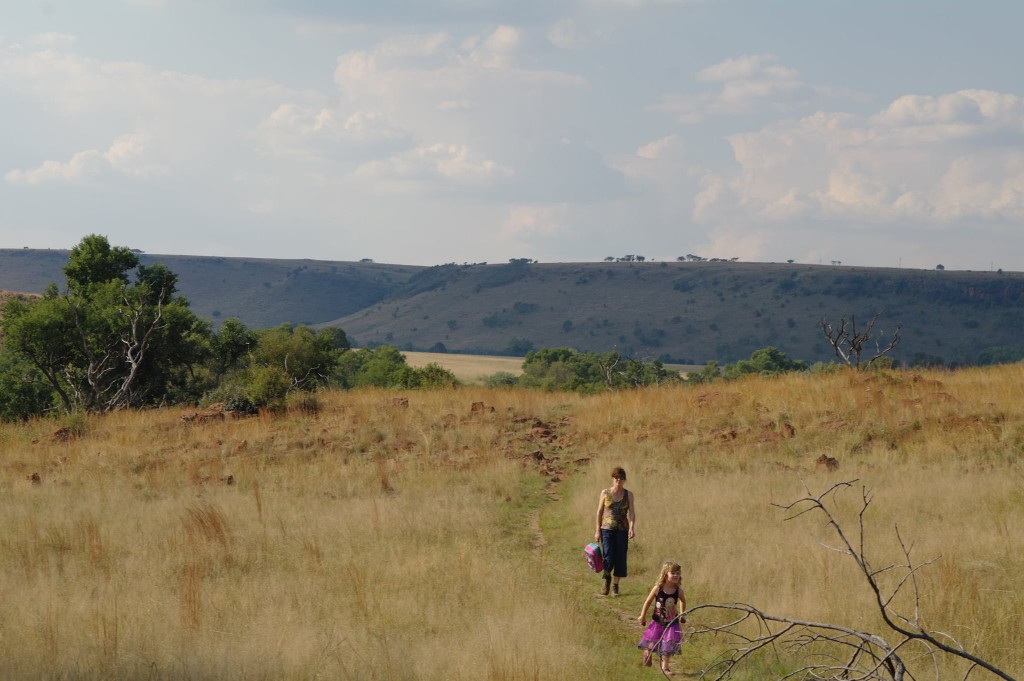 The beginning is a gentle stroll

You know those sayings about learning from your mistakes?  They don’t apply to us.  My only memory of doing the Penduka hike 7 years ago was a rising sense of panic as shadows lengthened  while we felt no closer to the end of the hike.  All the while baby Fjord laughed in the backpack while we fretted about the time. 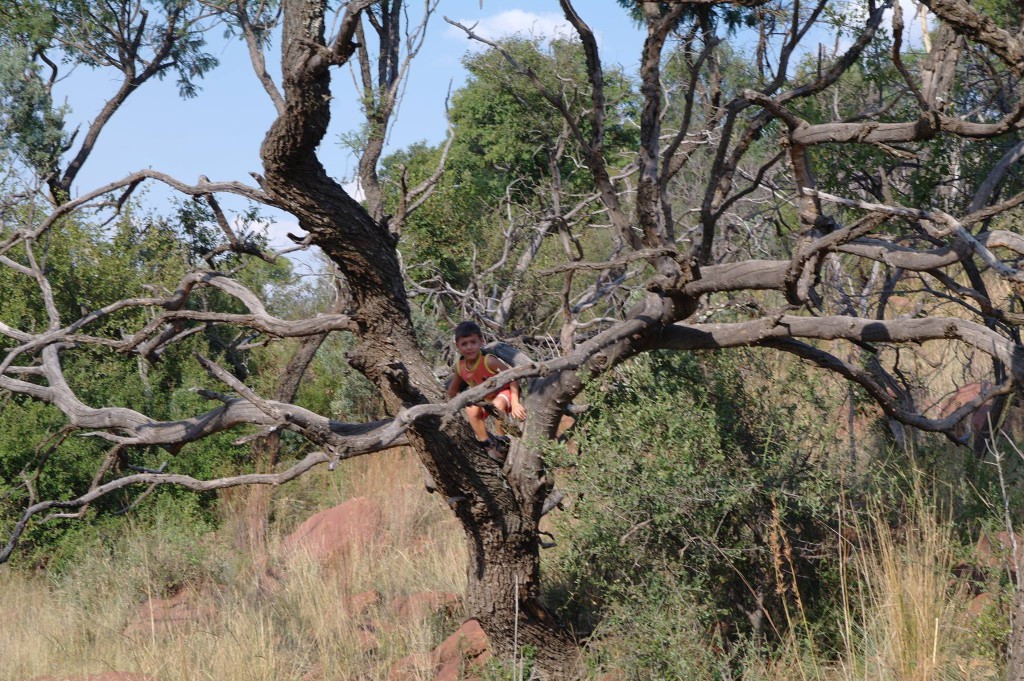 Fast forward 7 years, after a few delays we left home at 12h30, drove for 1.5 hours to Ezemvelo and enjoyed a picnic lunch.  Our hike began after 3 pm.  At this point I must mention that Fjord is 7 and Acacia is 4.  I strongly advise against taking children under 4 on this circular 6 km hike.  Even more strongly I advise that if you’re doing it with small children don’t start later than 1 pm.  That way you can get back before dark and even have time for a swim in the pool there. 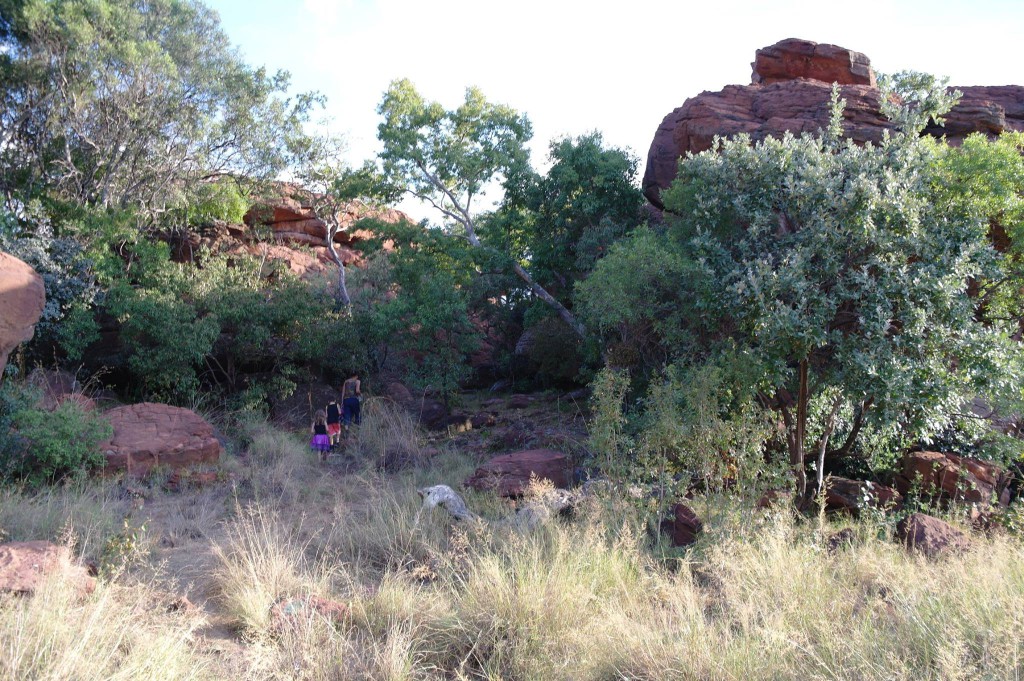 Normally a 6 km hike would be a doddle.  It is not a doddle when half of the hike is extremely steep, clambering down steep slopes and through rocky crevices.  The trail is beautifully marked when you are on segments as obvious as the yellow brick road.  It is less clearly marked when you reach a juncture and have no idea which way to go.

This is the first hike with our averagely noisy children that we have actually seen animals.  It was magical to see wildebeest and impala on the grassy plains. 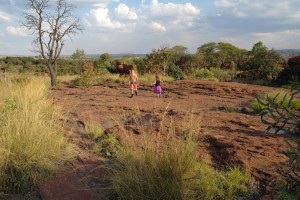 Before half way on the trail you get to a large flattish rocky area.  There is a nicely marked footprint as you step onto the rocks.  Then you have no idea where to continue, left, right or straight.  The correct choice is straight, on a hard to see path through a grassy patch.  Soon after on more rocks the hiking trail marker is a green footprint.  Who ever did the markers was messing with my mind.  Up to that point every marker was half yellow / half green.  Suddenly switching to solid green make me think that the trail had split to a green path and a yellow path, for all we knew one possible option could be a 20 km hike.  Naturally the trail map had been left safely in the car. 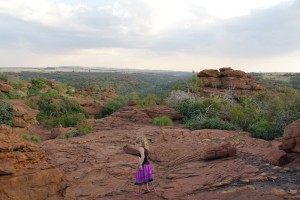 And the whole hike was done in a net skirt

At this point I said to Cliff, “For the record, I suggest that we turn back now.  If we do not turn back, when we get home at 8 pm, I reserve the right to say, I told you so.” I wasn’t spot on, we got home at 8.30 pm.  The hike was all downhill (literally and figuratively) after that first solid green footprint.  Downhill is fun when you’re on undulating hills or level ground, it is not fun when your children are in danger of falling down steep rocks.  The last segment took place after sunset as night creatures started up their songs.  The fun didn’t stop there, after over 3 hours of hiking (without children it would be about 1.5 hours), we drove to the gate only to find it locked and in darkness.  The children were tired and hungry and no one answered the telephone numbers on our receipt.  I was a little disappointed that a search party had not been despatched to find us.  I was more disappointed to be locked in a nature reserve, the night before ‘back to school’.  Eventually we found a house near to another gate and roused the gentleman to let us out. 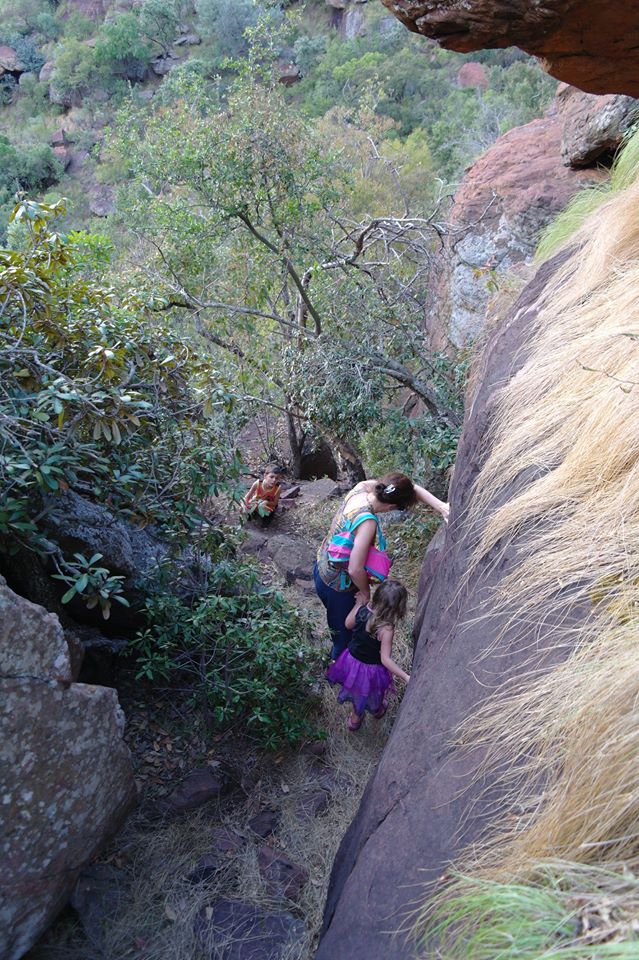 This picture doesn’t show how steep and narrow it was

Oddly I didn’t get super stressed by the misadventure.  Hiking at nightfall, I reminded myself that the next day we would wake healthy and alive no matter what happened, and I got to say “I told you so”.

Like Loading...
Gauteng hiking trail Penduka trail South Africa 2015-04-14
sula 1968
Previous: Wag ‘n Bietjie Padstal near Hoedspruit
Next: A tale of 2 memoirs – ‘The Know it All’ and ‘Bossypants’