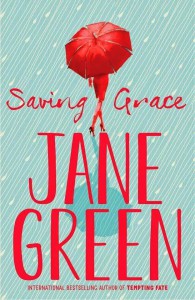 Reading Saving Grace by Jane Green was rather a rollercoaster.  I enjoyed it, then I was annoyed, I was interested in the characters, then I didn’t give a darn,  I liked one aspect of the ending and not another, and so on.   Frequently I had the same feeling as when watching a movie where the good guy enters a house of evil alone with a torch powered by a glow-worm.  I wanted to shout out “Don’t be such an idiot!”  Around halfway through the novel I started skim-reading, something which I almost never do, but I was very irritated.  Then a shift in the story focused my attention again and kept it focused until the end.   Despite not having a positive reading experience, I will concede that it is a page turner.

I may try out a few of the recipes featured in the book as some looked pretty good.  My favourite “chick-lit” book, Recipes for a Perfect Marriage by Kate Kerrigan also included recipes and after borrowing it from the library, I have always wanted to own a copy in order to use the recipes.

On finishing Saving Grace, I went onto my favourite readers forum and had a bit of a moan about the book.  This was the first Jane Green novel which I had read and it did not make a great impression, and so I was encouraged to find that other ladies more familiar with Jane Green’s work were disappointed too.  I had decided not to bother reading any more of her books but Bookends, Jemina J, Second Chances, Girl Friday and The Beach House were then recommended to me.  I was, however, advised not to bother with Life Swap, I shall heed that advice.

I feel a little guilty giving a less than glowing review as this book was part of a goodie bag at the blogging event #Joziblogs, but there’s no point being dishonest in the hope of being given other books to review in the future.