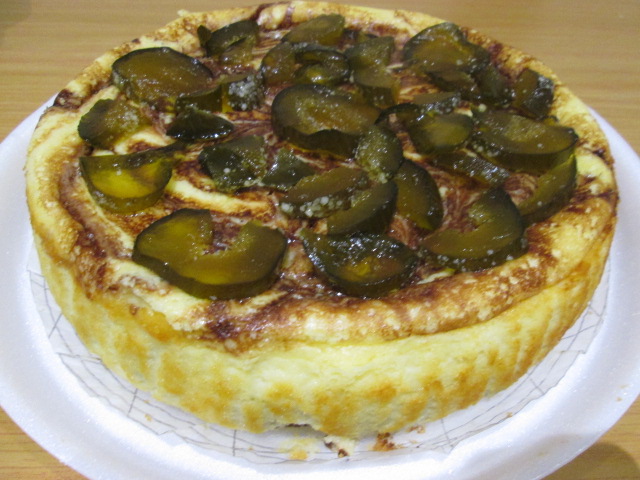 Acacia’s 4th birthday party is next Saturday.  I need to be vaguely organised and have discovered that baked cheesecakes freeze very well.  Just as well I decided to make it a week early.  Arrggghhh I made a mistake, my first cheesecake cracked, I searched for reasons on this page which has a selection of tips to prevent cracking and realised that I forgot to add the cornflour!   Cliff and I had some of the flopped one with afternoon tea and it actually wasn’t too bad, just a bit too soft.   I had to start all over again and make another.  A very expensive and annoying mistake.  However I did make 1 change the 2nd time, so we live and learn.  Originally after looking at a Lovely Marbled Cheesecake recipe on Pinterest last night I wanted to incorporate the marbled effect with green food colouring.  I thought that it looked quite pretty but my husband and son did not agree.  The 2nd time I left out the green colouring and only marbled in chocolate.  I have a bottle of fig preserve, bought at Simonsig wine estate in December and it needed to be used, I worked the recipe around this.  I think that chocolate and figs are a good combination.  The great thing is that I can freeze the cheesecake and forget about it until I take it out for the adults at the party on Saturday, one less thing to think about. 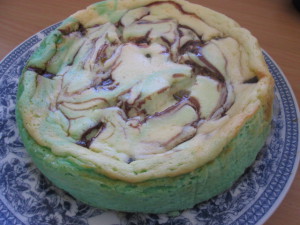 Below is the recipe which I decided was best, if you want to use green food colouring and marble it in, do the following.  Before pouring into the tin, pour half of the cream cheese mixture into a bowl and fold in about 3 drops of food colouring, when the mix is a solid colour with no streaks pour into the white mixture and fold twice gently then pour into the tin.

Mix the ingredients (I use a food processor for this) for the crust and press firmly onto the base (not sides) of a 20cm springform tin lined with baking paper.  Use the back of a spoon to spread evenly 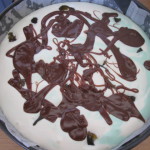 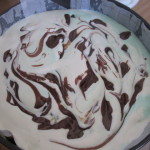