How strange that I closed the last page of The Deathly Hallows, the final Harry Potter book to see posts on Facebook and Twitter celebrating 20 years of Harry Potter.  Just over 20 years ago my older children wanted to enter the world of Harry Potter.  I was not sure if I should endorse this as many Christian friends and family members said that the books were ‘bad’.  I decided to read the first before allowing Domi to read them.  I found nothing of spiritual concern.  If magic in a story worries some then in the name of consistency ‘Mary Poppins’ ‘Tinkerbell’ and other childhood favourites would have to fall under the same umbrella.  Personally I feel that childhood should be a little magical.  Kids are smart enough to separate fiction from reality and if not they soon learn.  I recently watched Acacia waving a toy wand over a pile of toys on the floor with a look of deep concentration saying “Abracadabra”, when the toys failed to pick themselves up and march off to the cupboard she resigned herself to having to tidy up herself.

Domi my eldest child (now a foundation phase school teacher) was (is) ADHD and dyslexic.  Every Saturday we were at some form of therapy, I never got the feeling that we were moving forward in leaps and bounds.  JK Rowling did more for her than a fortune spent in time and money in the name of therapy.  JK Rowling got her reading.  From Harry Potter she moved on to reading other works, including very difficult old English such as ‘Little Women’ and other classics.  I read Harry Potter in tandem with her and her brother Heath but stopped at ‘The Goblet of Fire’ as the remainder were yet unpublished.

About 8 weeks ago I found our old Harry Potter’s on the bookshelf and gave the first to Fjord (age 9, will be 10 in Aug) to read.  He was hooked from the first page and asked me to join him on the journey.  We shared magical time side by side in the world of Hogwarts, muggles and magicians.  This time around I had only one reservation, the subject of death.  I knew that in The Goblet of Fire, a key good guy dies.  I felt that as westerners we live in a culture of death denial, we turn a blind eye to the absolute certainty of death, not embracing death’s part in the circle of life.  We fear and despise the subject, and when death comes the shock and horror are crippling.  I felt that Fjord would cope with the death in Goblet of Fire, and that acknowledgement of mortality is important.  Also the character who dies in Goblet of Fire is not one with whom the reader has formed an emotional attachment, the sadness of this fictional death is fairly abstract and should not weigh too heavily on his tender young heart.

Reading always a step behind him I was unprepared for the body counts in the later books.  Central beloved characters fall in dark and horrible circumstances, leaving profound sadness.  By the time I realised that I would have preferred him to read the series around the age of 11 or older it was too late and I knew that he would have to be allowed to reach the conclusion of the last pages of The Deathly Hallows as good must prevail.  Good did prevail but the final chapters had me quite worried.  Knowing what I know now, I will make sure that Acacia waits much longer to begin the Harry Potter journey. 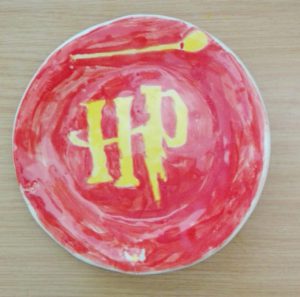 Fjord painted his own ceramic plate which I made for him. A friend with a sharp sense of humour referred to it as Harry Pottery

I salute JK Rowling.  I envy her fame and fortune but she deserves it all.  She more than any writer in this generation has got children reading.  Other authors can thank her for their book sales as from the springboard of Harry Potter children have moved on to develop a hunger for reading.  She dished up some heavy stuff, but in doing so, stretched internal capacity to hold a deeper appreciation for life.

At what age do you think is the youngest that a child should read the Harry Potter series?