Emma by Jane Austen should have been written as a play 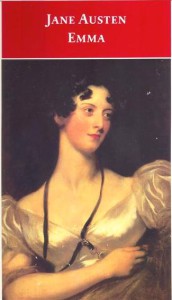 Until 3/4 way through Emma I was annoyed to be donating precious reading time to Jane Austen this time. Emma irritated me and I cared little for the other characters. I appreciated the humour and irony. Lines such as “Mr Knightley seemed to be trying not to smile; and succeeded without difficulty, upon Mrs Elton’s beginning to talk to him.” raised a smile. What struck me most was the lack of descriptions, almost nothing in terms of setting is described in any detail.  It’s all people, relationships and dialogue, which felt very mono-dimensional to me.  I was unable to form mental pictures.

As the story reached its climax the book held my attention more, I ended up developing a fondness for Emma and some other characters.  There was definate and brilliantly executed character development.  Others such as her father Mr Woodhouse, nice as he was, peeved me to the end.

Emma is a worthy classic.  I do however feel that it should rather have been written as a play instead of a novel.  Now that the book is done and dusted I am keen to revisit certain scenes and will attempt to watch the movie soon.  I have a strong feeling that this will not be a case where the book outshines a movie.