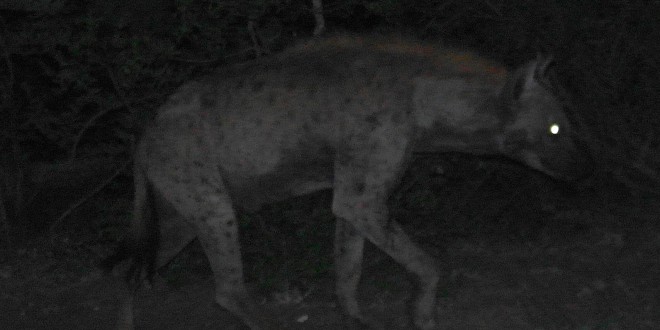 Many adjectives apply, cute is not one of them 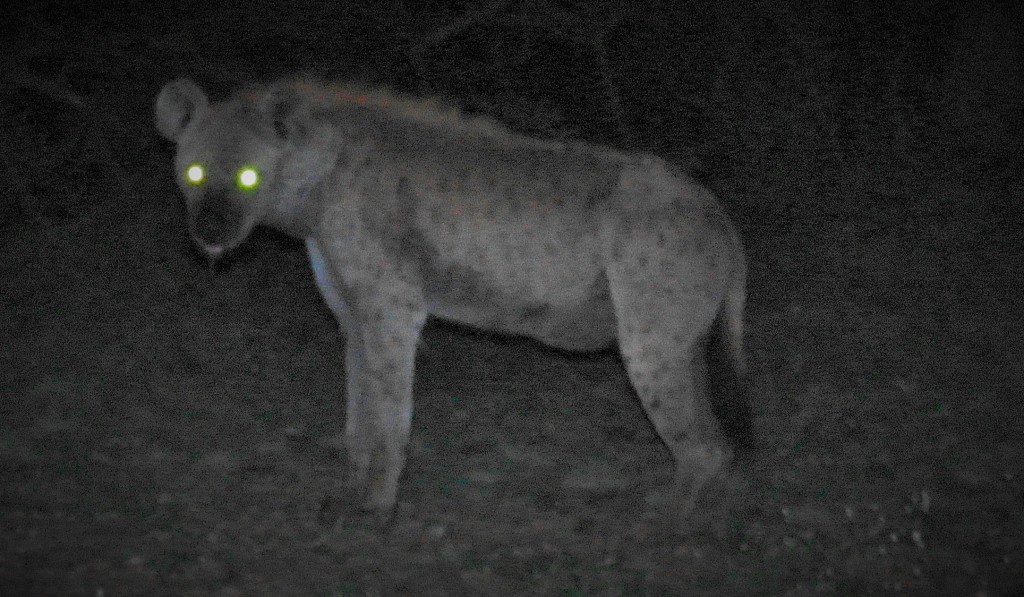 Four years ago at Mpila camp at Hluhluwe / Imfolozi game park in Zululand we had a night straight from a horror movie (except it would have seemed a bit far fetched). In short a man tried to rob us and a hyena almost made a light snack of my sleeping children. We were staying in the tented camp. 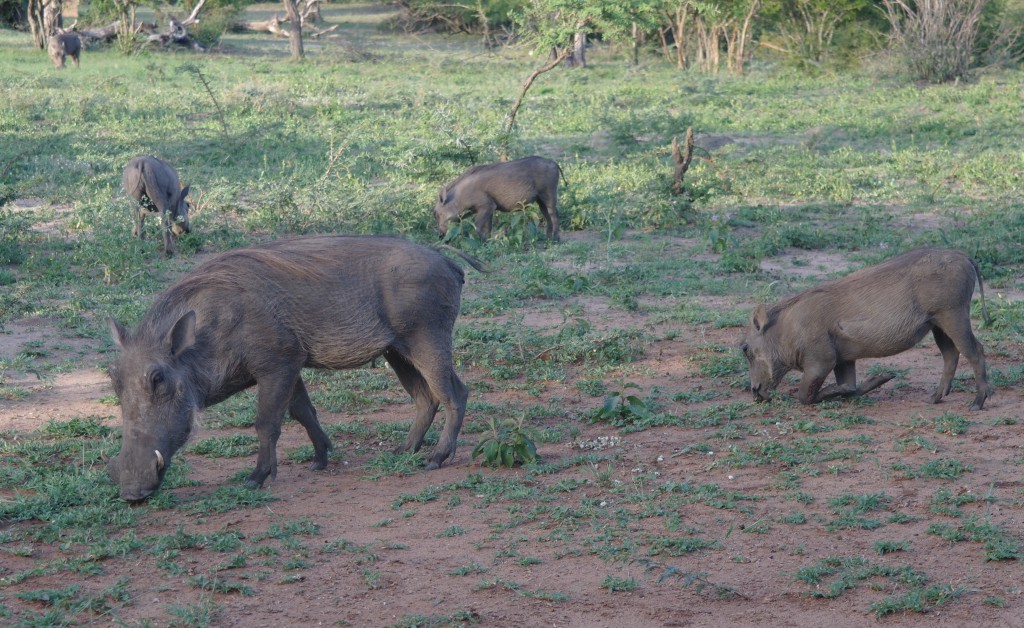 This time we chose a brick and mortar chalet. I could tell you about the adorable warthogs, I could wax poetic about the sights and scents of the African bushveld. Not this time, once again I’m going to talk about hyenas.

Mpila camp is an unfenced, authentic bush break. The only electric fence around the camp are 2 high strands to keep elephant out.

At dusk Cliff and 8 year old Fjord went on a group night drive. I stayed with Mum and 5 year old Acacia. I took over cooking supper on the braai (barbecue). Taking the office rangers warnings seriously I did not leave my food and fire unattended. Mum was charged with bathing Acacia and keeping her indoors. 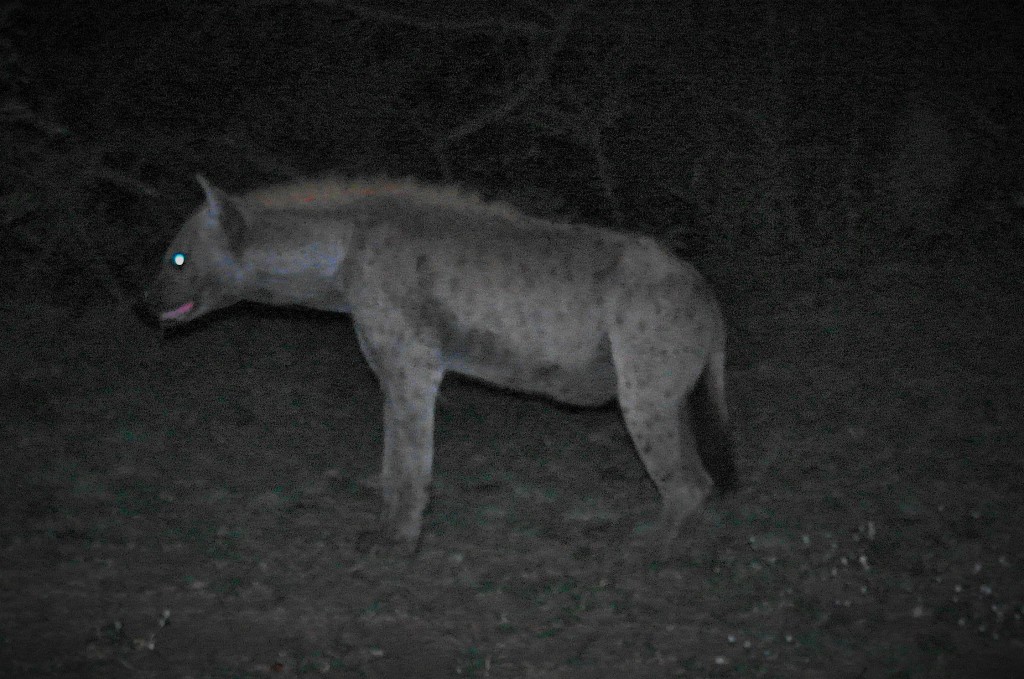 Sipping a glass of wine, dusk-dreaming and turning the meat, I searched the twilight. A silent shadow appeared in the sloping shape of a hyena. Wow, they are so much bigger in ‘real life’. As Mum returned to the chalet with meat from my braai, I shouted to her as a hyena walked between us, about 3 meters from her. Her response “SHIT!! VOETSEK!! (go away) had me giggling for the rest of the evening.

I lost count of how many times hyena circled our chalet, at most 15 mins passed between each sighting until we went to bed. Often sinister, brazen, gold eyes looked directly into ours. Don’t get me wrong, I find the animals strangely beautiful, thrilling and powerful, but they do exude an air of danger. Many times they stepped onto our small adjoining patio and gazed what seemed a challenge at us through the glass. They were absolutely fearless.

We have to remember that the bush is their space, as the urbanised world expands, their bushveld is precious territory. We are blessed to share their world for a while. Sadly on the whole, humans are selfish, and do really stupid things. Despite parks board warnings it is very obvious that people feed the hyenas. The scent of food draws them. At one point a hyena lay down in front of the chalet. When I opened the window to take a photo from inside, he did not run AWAY he ran TOWARD me, stopping a mere metre from where I stood safely behind glass. He was very obviously waiting for me to throw food to him. (Sorry I was too busy being startled to get that eyeball to eyeball pic). 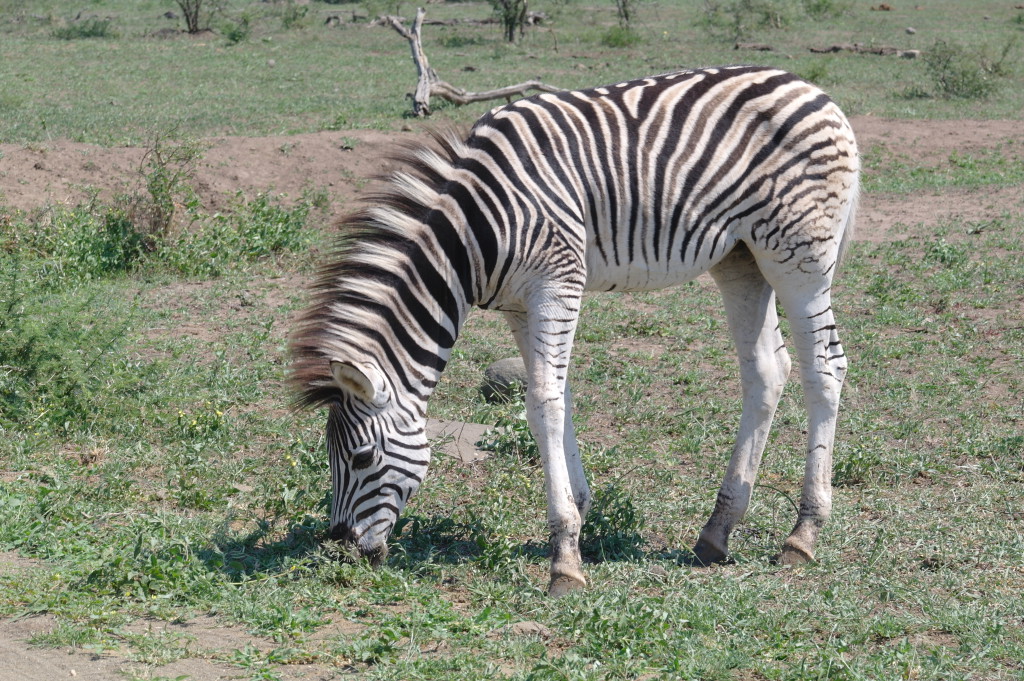 If hyena hunt the likes of Zebra, you are small fry

This is a disaster waiting to happen. Imagine a child (or adult) walking at night with a piece of food in hand. Those jaws are made to crunch bone. What happens won’t be the child, parks board or animal’s fault, the guilt will rest squarely on the shoulders of the dumb f**KS who fed the hyenas. We think of the hyena as a scavenger, in fact the spotted hyena kills 95% of what it eats. In packs they hunt animals such as zebra and antelope (at one point there were 2 hyenas on our patio). A pissy little human would be easy pickings.

Please oh please, stop feeding the spotted hyenas at Mpila. Don’t be the one to tip the fragile balance.

** Last month a man was bitten by a hyena through his tent at Cape Vidal in Zululand.