Pregnant and Alone, I’ve been there 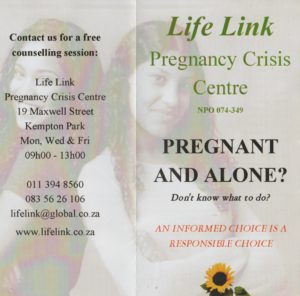 Arriving at a Lifelink benefit tea, the words “Pregnant and Alone” on the brochure jumped out and gut punched me. A kaleidoscope of memories whirled like leaves in a mental hurricane. I was 20 again. Telling my parents that I was pregnant. Telling the father from a phone-booth in Davenport centre and his echoing response “It’s your baby”. The horrible gynae who treated me with cold disdain. Looking at the full moon and sobbing. Listening to Simply Red (he looked like Mick Hucknall) and sobbing. Phoning Lifeline and finding emptiness instead of solace. Going to a church home cell meeting in search of prayer and guidance, only to be shat on by the cell leaders for not following hierarchy protocol and discussing first with elders etc. I was pregnant and I had never felt so alone. If only I had, had access to Lifelink back then. I know that someone like Sharon would have stilled my troubled waters.

Guess what? I found myself in the same boat AGAIN a year later. Go ahead and judge me, you won’t be the first. That time the father married me (although we divorced a year later).

Those 2 babies are now 26 and 24 years old. I cannot begin to express the joy, completeness and pride which they have brought me. I would not change anything. I only wish that I had access to good counselling as offered by Lifelink, and I wish that I had fully appreciated and cherished the fact that those precious lives were being formed within me. The sadness, loneliness, fear and rejection added nothing and only robbed me of joy.  I won’t lie, there were times when being a single parent was really hard, but no matter how tough some times were, they were infinitely worth the discomfort.

After many many years as a single parent, I re-married. My last 2 children were born in my late 30’s and early 40’s. My four children are the sum of me, they are my everything. 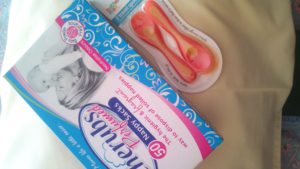 Thanks to Cherubs and Brother Max for these donations

Back to the Lifelink tea. My friend Abbey annually hosts a function where guests donate groceries and baby goods (new or used) for mothers in need. Sharon from Lifelink gave a brief talk explaining the different areas of counselling which they offer, and telling positive stories about her experiences. Good people like Sharon inspire hope and positivity.

If you have baby goods which can be used (even a half used bottle of baby shampoo is welcomed), this is a golden opportunity to give back to the circle of life by donating to Lifelink. Even better, invite a group of friends around and host an event. We all brought a chocolate num num to Abbey’s and enjoyed Treats and good company together for a really good cause.

You can read more about my elder children in these posts.

Dominique’s wedding last year, and the healing of her father being there

When Heath moved to Cape Town