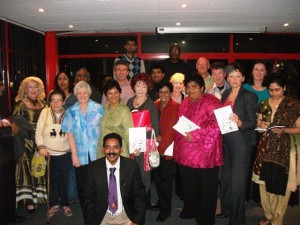 A while ago when LiPS (The Durban Live Poets Society) moved to A Novel Idea. I wrote about the history of the group from when it formed until I left Durban and moved to Jo’burg. Jill took the reigns after my move and kept the wheels turning for a year until she handed over to Brett.  This is Jill’s contribution.   LiPS meet on the first Wed of every month at A Novel Idea in Westville.

convenor. My first meeting was held in my parents’ spacious house. But as Sula has mentioned,

meeting in a private home is not a great option. In addition to the “intimidating facade”, having to

park in the street also discourages attendance – a sad indictment of crime in our times.

We traipsed from pub to club to coffee shop, hardly ever knowing from month to month where we

would meet next. “Fat Cats” became thin and expired, “The Upper Deck” seemed to turn up its

music decibels whenever a poet was in full flow, the management of “Friends” became unfriendly

as we weren’t spending enough for the space occupied … and so it went.

It’s a tribute to the commitment of the group that it held together through those trying times,

producing fine poetry along the rocky way. Some prizewinning work was penned during my two

years in the chair, notably by Hannah Lurie (“What’s the Point?”) and Brett Beiles (“The Blue

Note”), and I hope I played some small part in that. Thank you to the group for its support.

And thank you to Brett for agreeing to take over when I moved to the Midlands. His visionary

map – not only in Durban but the country as a whole. I believe the group now even has strong links

overseas. Although I’ve yet to meet Brett’s successor John Ballam, I know some of his poetry and

am sure he and the new committee will continue to build on what Sula started and Brett continued.

And now for a poem demanded by the editor …

the sun will go out

darkness will be upon the face of the earth

as it was in the beginning

should this concern me