Frank’s car washed off bridge into Braamfontein Spruit, a catastrophe can lead to good. 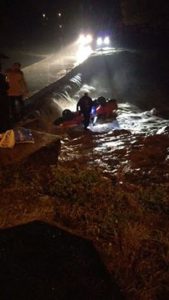 The best news is news where a horrible situation brings about good. It’s even better if we can play a part in bringing that good to be.

On Saturday (14 May), most of us rejoiced in the out of season, unexpected rain, it was good news. The drought has been devastatingly long and every reprieve is a blessing. For Frank, the breadwinner in his family, this rain was an unmitigated disaster. Frank works as a security guard at a residential complex on Coleraine Drive. On his way to work he had to cross the bridge over Braamfontein Spruit on Grosvenor / Belgrave Street. The water was more dangerous than it looked, his car was washed off the bridge and into the river. Over the years flooding on this bridge has led to some fatal drownings. Despite this catastrophe Frank’s priority was not to be late for work. He climbed out of the car window, left his car in the river and thoroughly soaked, walked to work. 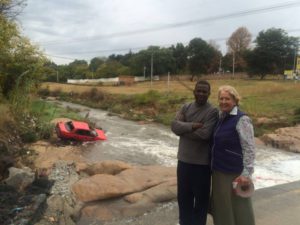 Frank does not have the resources to have his car repaired. Mechanics and panel beaters do not come cheap. Now for the feel good part of the story. My aunt Maeve, who lives in Riverclub has shared this story with me as it unfolds. A lady called Rose who lives in Riverclub, tracked Frank down and met with him. She posted his story on the local community What’sApp group. She has already handed over what will hopefully be the first of many contributions to him donated by community members.

It’s one thing to read this and smile but it would be far more special if you could contribute to helping Frank in some way. Financial contributions will go toward repairing Frank’s car. He managed to borrow money from a friend to remove his car from the river last night. If you know a panel beater or mechanic who may be willing to help that would be fantastic. Please share this so that Frank has access to as much help as possible.

or you can drop off donations in an envelope at 26 Jacaranda Street.

Like Loading...
bridge Bryanston flood Gauteng Riverclub Sandton South Africa 2016-05-16
sula 1968
Previous: Pregnant and Alone, I’ve been there
Next: Some fun and a little life lesson from Snowflake and Barbie