At the end of last year, on my way to pottery, I was pulled over for not stopping at a stop sign in Edenvale, I was sure that I had stopped but the officer said that I had not, it was not sensible to argue with her.  After going back to take photos a few weeks later I tried to go and see the prosecutor at the Edenvale court without success, being that period before Christmas when places of work are almost empty.   I searched online and asked on social media and found out that you can write to the prosecutor to contest a fine / summons and it is best to send a letter by registered mail as then you have proof of having sent the letter.  I did this, attached the above photographs and then very stupidly did not follow up before the date of the court case. 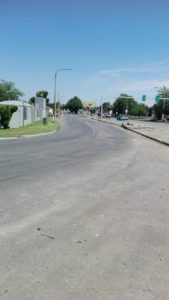 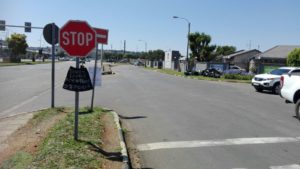 I have a near phobic relationship with red tape and was very stupid not to follow up on the fine.  What I should have done before the court date was to check that the prosecutor had received my registered letter.  Edenvale don’t answer their phones but I should have gone back in person or failing that attended court on the court date.  I did not.  More than 2 weeks after the court date I went back to the Edenvale court to be told that there was a warrant issued against me for contempt of court.  That was extremely stressful.  I was told that I then had to go to Kempton Park, 11 Long St, as they handle registered letters there.  The prosecutor at Kempton told me that I should not have been sent to him but was meant to go somewhere else.  None the less he informed me that I now had an additional fee of R300 for contempt of court over and above the R500 fine.  Thankfully he reduced the fine to R200.  In the end I had to still pay R500 which would no doubt have been less had I seen the prosecutor before the court date, or I’m told, if I had paid online (I haven’t checked this).  This whole exercise all together cost me what amounted to around a full day of running around and admin and a massive amount of stress.

below is the content of the registered letter which I sent.

I visited the courts this morning in the hope of discussing my traffic fine incurred on 12 November 2017. Unfortunately you had already left. I hope that this letter will meet with your leniency with regard to the alleged offence.

The peace officer who stopped me said that I did not stop at a STOP sign. As there was no STOP sign near where she was standing I had to ask which stop sign she was referring to. She walked with me from where my car and the police vehicle were parked past a sharp bend in the road and pointed to a STOP that was barely visible from where we stood and where she had been standing when she gestured for me to pull over. Furthermore, from this vantage point, the road marking line behind which a vehicle should stop was not visible at all. My understanding of the law regarding STOP signs is that not only must a car stop, but it must also stop before the road marking. I told her that I was certain that I had stopped, but when she asked if I was saying that she was wrong I felt that it would not be sensible to argue with her and accepted the summons handed to me.

A week later I returned to the place where the incident occurred, in order to take the attached photographs to demonstrate how from her vantage point it would be difficult to accurately assess whether or not a car had in fact stopped where necessary.

I am an extremely cautious driver and it has been many years since I have been charged with any traffic offence. I remain certain that I did in fact stop where the road markings indicate.

I look forward to your response.

Lessons learned from this.  When wanting to contest a traffic fine / summons in South Africa.  If possible see the prosecutor.  If sending a registered letter FOLLOW UP before the court date.  I believe that in areas where AARTO is in effect different procedures need to be followed.