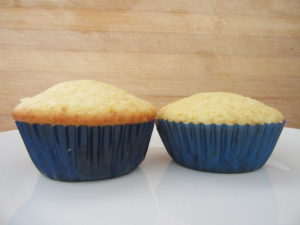 Exactly the same amount of batter in both, from the same mixing bowl. The cake on the right went straight into the pre-heated oven, the batter for the cake on the left rested in the pan for 20 mins before baking.

I really don’t like it when bakers won’t share their recipes or tips.  The kitchen should be a space of warmth and generosity of spirit.  I have been baking for over 4 decades and recently discovered something really amazing.  Others must have discovered this before, I can’t be the first, but I’ve never seen anyone share this tip.  You know how every recipe starts with Step 1, pre-heat your oven to x temperature, well if you want your cakes to rise to greater heights, make the texture more light and fluffy and rise more evenly ……  TURN ON THE OVEN, WHEN YOU HAVE COMPLETED THE LAST STEP of your recipe.  During the 15 or 20 mins that it takes for your oven to heat, the rising agents in your cakes or cupcakes start to work very gently at room temperature.

I discovered this by accident when baking a big cupcake order and found that the first tray going straight into the pre-heated oven did not rise as well as the second and subsequent trays which were waiting on the counter to go in.

I tested this a few times over the past 2 months and each time found that the cakes going into the oven after first resting while the oven heated were better in every sense.  Try it yourself and you will be amazed.

I have made the cake below a few times, it never rises evenly, this time I turned on the oven after the batter was in the pan and it rose perfectly evenly, the texture was also more light and fluffy.