This is a real ‘Duvet Covers for Dummies’ set of instructions. When it comes to most instructions, the line from ‘Bugs Life’, “He talked fancy to me, I got confused” applies to me.  I need very clear, simple instructions.  I Have wanted to make a duvet cover for Acacia’s bed for months, I looked at a book, googled, looked at You Tube video’s and was still confused.  Eventually I decided to look at an existing duvet cover and made a mini one first from a small scrap of old fabric.  Once I did this, I figured it out.  Surprise, surprise it really is simple.  I didn’t bother with French seams which I had come across in the various previous instructions.  I was amazed and delighted when I had created a perfect duvet cover.

One suggestion which I used was to use flat sheets, for some reason I have an abundance of those in my linen cupboard,  This meant that the duvet cover cost absolutely nothing.  I didn’t want to buy fabric for my 1st attempt, if it was a disaster it would have been a waste of money.  Fortunately the pretty floral flat sheet had a matching pillow slip.  I chose a floral patterned sheet for the top and a plain pink as a contrast for the underside.

In my instructions I have given steps 1 and 2 to apply velcro or popper tape and hem.  As I used old sheets which were already hemmed, I trimmed the sheets and left the bottom end hemmed to skip these steps as I could not find my velcro and the strip of popper tape which I have at home was too short.  I sewed on press studs instead as the final step.

The most important part of making a duvet cover is to have a large flat surface to cut out the fabric.  First I measured the duvet inner, mine was for a 3/4 which was 150 x 200.  As per instructions which I had read I then added 5cm to each dimension for seam allowances.  Rather be a bit too big than too small with this, I found that despite my efforts my cutting was not dead straight and the top and underside were slightly off, having a decent seam allowance meant that I did not end up with a cover which was too small after correcting this.

If you are using velcro or popper tape position it in the centre along what will be the bottom edge of your fabric on the right side of the fabric.  Sew it in place.  The red crayon on my diagram shows where to stitch.  (The funny little circles are my attempt to represent popper tape) Fold over your bottom hem so that the popper tape or velcro is now on the wrong side of the fabric, stitch the hem in place. Measure 15 – 20cm in from each side of the bottom hem mark this then stitch as per diagram lines in red.

Trim edges and turn the cover to right side, voila!

If you are not using Velcro or popper tape, press and mark where to place buttons and button holes or press studs.

Acacia was so exited about her new duvet cover that she leapt straight into bed and snuggled down with a big grin.

If you have anything to add or query feel free to comment below, or if you have made your own I would love to see a pic. 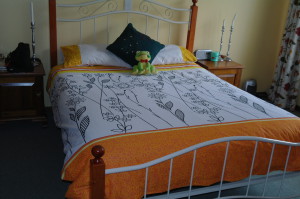 I also made a duvet cover for our bed.  The size fabric which I used for a queen size duvet was 220 width x 205 length (2 pieces) this is without seam allowances as I use the overlocking stitch on my sewing machine and sew close to the edge.  On this printed fabric the length of the duvet cover is the width on the roll at the fabric shop.

Like Loading...
crafts sewing simple duvet cover instructions 2013-08-22
sula 1968
Previous: You only need one Recipe Book ‘The Best of Cooking in South Africa’ – Lynn Bedford Hall
Next: When a life equals a handbag, we must worry