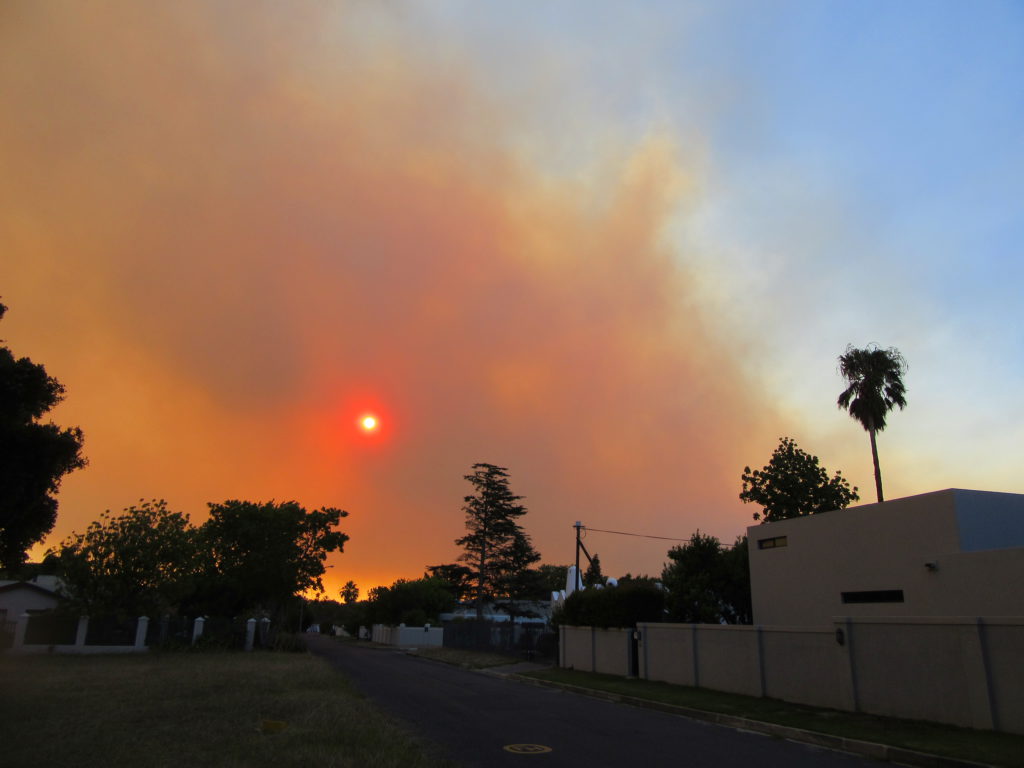 This evening Somerset West is eerie, the air is so thick with smoke you can taste it.  Unrelenting wind blows ash and grit into your eyes.  Tonight is our last night before heading home, right now I would prefer to be anywhere other than here.  I spent the day with my eldest son Heath, we played Putt Putt in Strand and went to Trigger Fish Brewery for lunch (and beer).

Driving back to Vergelegen Ave around 3pm we noticed smoke.  Heath being somewhat like me first said “I hope I didn’t leave anything switched on at home”.   The wind has died down a little now (23h48) but almost all day it has been crazy, the worst possible conditions for a fire.

We stayed at Al’s house in Vergelegen Ave for a while but I wanted to see where the fire was.  I am a bit of a fire chaser but I’m also afraid of fire.  I will never forget 3 childhood nightmares, one was that our home was surrounded by fire and our nanny was trying to carry my brother and myself over burning ground and a railway line to escape.  Fire is beautiful, powerful, fascinating and scary dangerous.  First under 1 km from where we are staying the fire was evident at Radloff Park, we parked at the Shell garage on Lourensford road and walked a little way past where police had blocked the road, then turned around.  Next we decided that we should check on Heath’s home in Boskloof Road, a fire burning very close to where he lives was being fought by 2 helicopters dumping water from Boskloof dam.  That was rather fun to watch at such close proximity, they do pretty amazing work.  When we returned to the area around 10 pm the fire was no longer in evidence.  Water still ran down the road as sprinklers are turned on as a precaution. 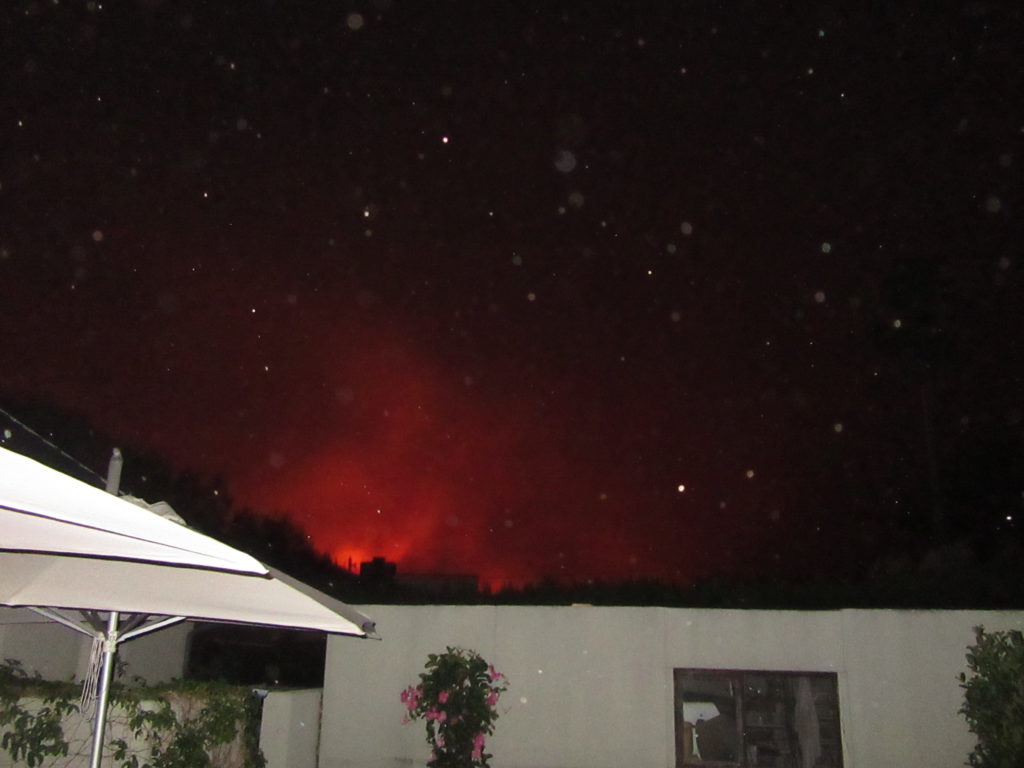 The view from our garden tonight. The white flecks are ash caught in the light of the camera flash 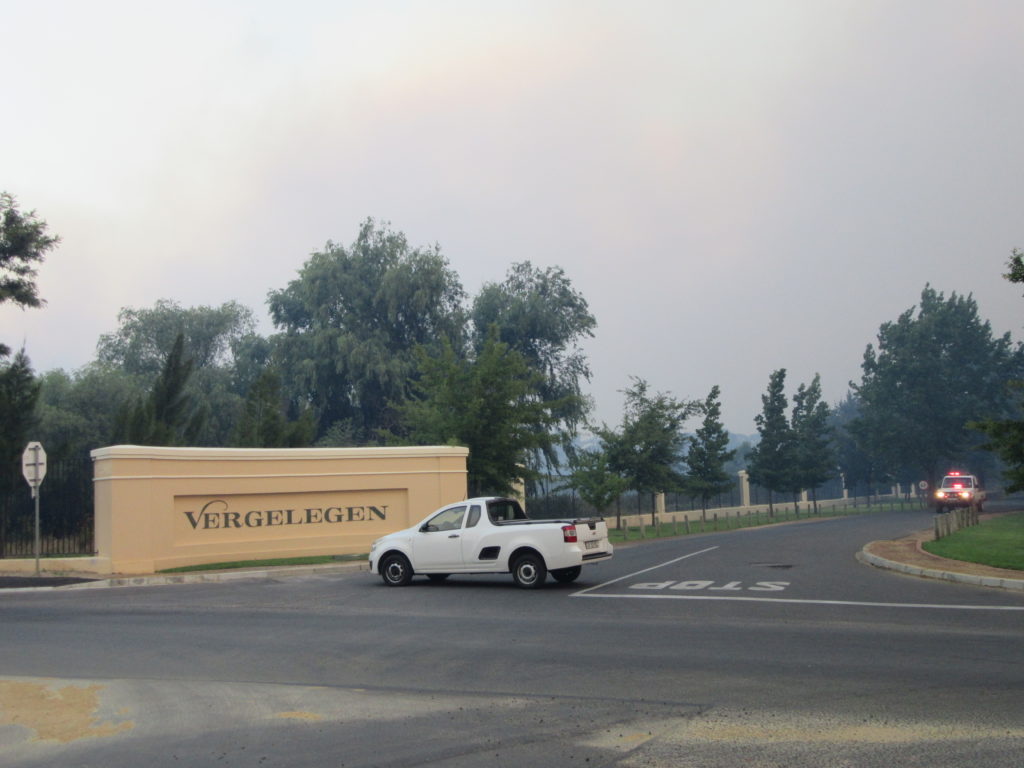 Vergelegen Wine estate entrance is at the end of our road here.  At around 18h30 the entrance was blocked. 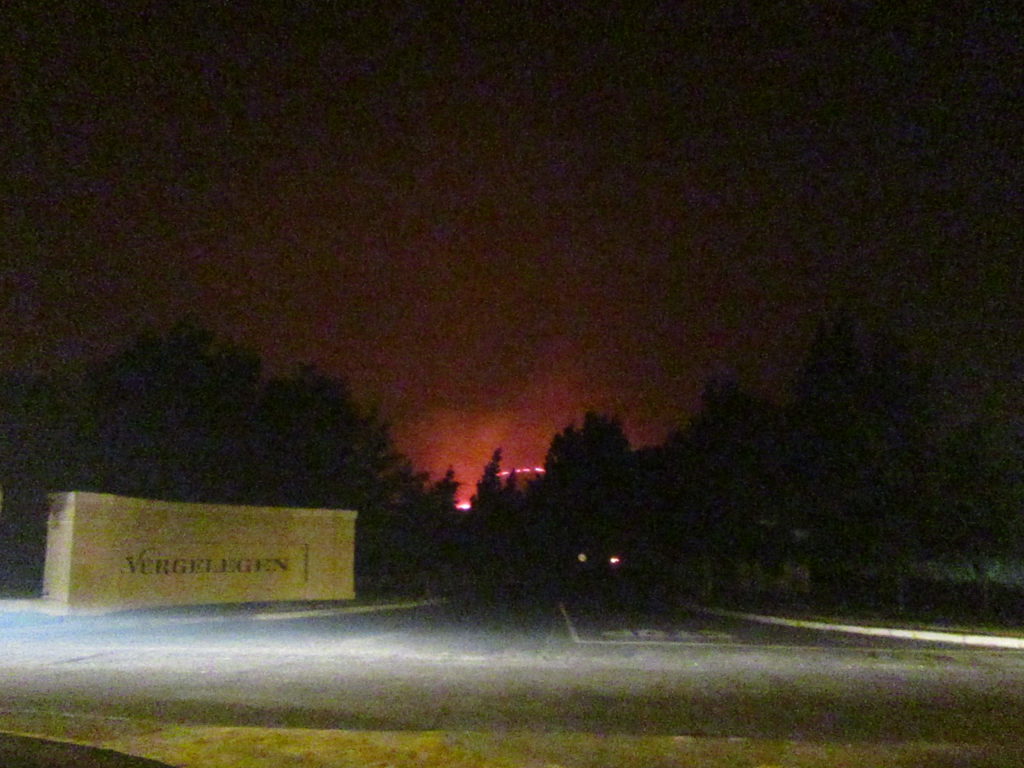 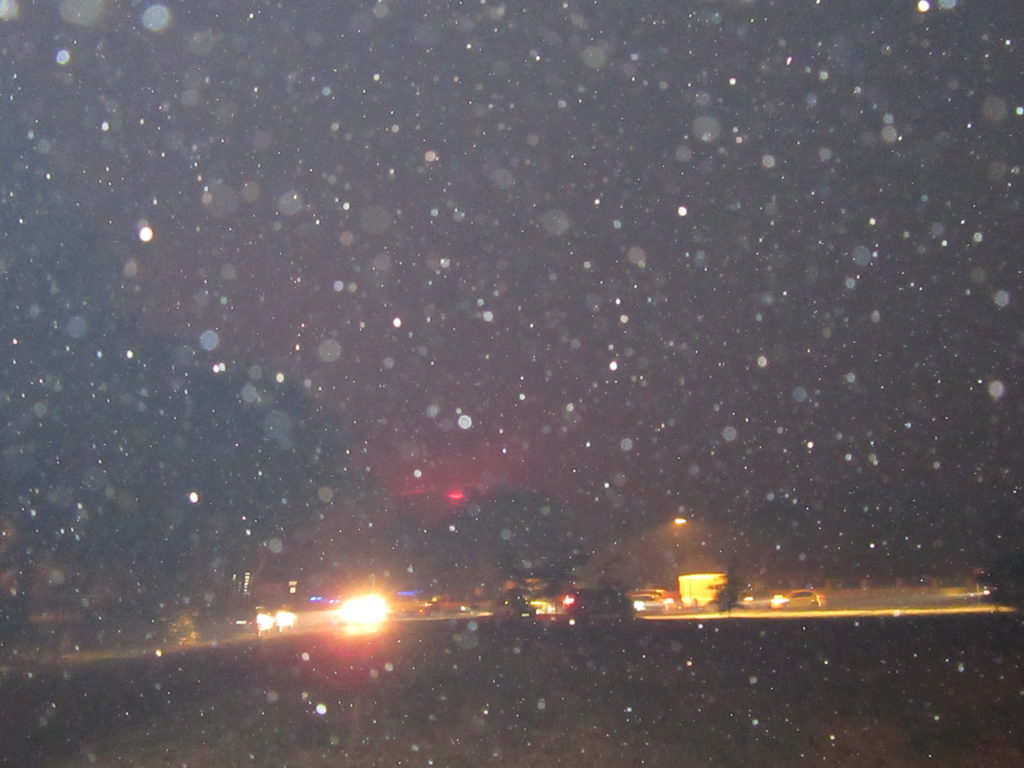 Driving Heath home around 23h00 was eerie, clusters of people stood capturing the surreal landscape.  Blue and red lights from emergency vehicles lit the haze.  We passed the NG church where local residents are dropping off food and drinks for those working through the night to keep us safe.  There is a sense of calm but the air is electric.  A string of cars pulling horseboxes came from the direction of Lourensford estate, they must have evacuated the horses as a precaution.  Lourensford estate is so close that I have walked there from where we are staying, a few times in the past.

I guess it will be safe for me to sleep now.  We have a long drive tomorrow, a lot of packing to do in the morning.  I hope that the fires are under control in the morning.