Typical in a mad hatters home, we got father’s day wrong.  During the week I asked Cliff when Fathers Day is and he informed me that it was this Sunday 8th June.  Like a good Mummy of his children I set the father’s day wheels in motion.  Prezzies were bought and wrapped.  When I was pregnant with Fjord I started a little tradition (didn’t know that I was starting it at the time).  I bought Cliff a ceramic frog from Gismo (our name for Fjord before he was born), since then every Christmas, Birthday and Father’s day the children give him a frog of some description.  This time I was delighted to find a Frog solar garden light at Checkers Hyper, I also had a mug printed with a picture of Fjord and Acacia. 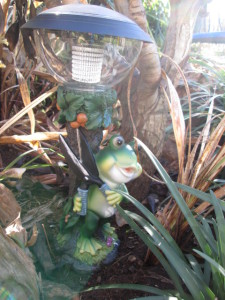 Yesterday morning he was allowed a lie in, I made a cooked breakfast and gifts were given.  It was shortly thereafter that Cliff read that Father’s day is in fact next weekend on the 15th.  Hmmm was this a smart ploy to get 2 father’s days?  I decided that we would simply carry on as if it was in fact father’s day, I made one of his favourite meals, coq au vin for supper to round off his unfather’s day.  I’ll ignore next weekend.