Anybody out there – Marian Keyes 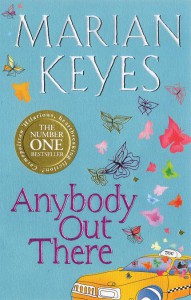 The book Anybody Out There, almost put me right off Marian Keyes.  A third of the way through the book I was very bleak about the direction which the story took.  I won’t tell you more as I have an aversion to spoilers.  I stomped and moaned about what a fail it was as a light Christmas read.  My sister-in-law informed me that she closed the book at the same point and was put off Marian Keyes thereafter.  I was however pleased that I persevered.

The subject dealt with is a far cry from light and fluffy (what I was after), but Marian Keyes handled the topic with such equanimity and well placed humour for comic relief.

I later found out that Anybody Out There s the fourth book dealing with members of the Walsh family.  Each book tells the story of a different sister.  They fall in the following order.

The Mystery of Mercy Close

I look forward to reading these in the near future.

Like Loading...
book review book reviews books Marian Keyes 2015-01-01
sula 1968
Previous: A not so fruitful drive through Ceres
Next: Winters Drift, travelling through time and tasting wine in Elgin