The 10th of April started no different to other days.  At pottery I was dimly aware of pain in my breast but I was too busy playing with clay for it to register.  I’m 50, I get odd aches and pains.  That night the pain had escalated to unbearable and I barely slept.  The next morning I told my GP that it felt just like mastitis (I stopped breastfeeding Acacia more than 6 years ago).  The breast was hard, swollen and at the focal point the external skin was hot and red over a diameter of about 6 cm.  There was clearly serious inflammation.  She diagnosed a blocked duct and prescribed an anti biotic (the breast specialist who I saw this week, said that the anti biotic course should have been longer than 5 days and there should have been a 2nd medication prescribed).  At the end of the 5 day anti biotic course there was a slight decrease in pain but a lump had formed .  The dreaded mammogram was not as painful as expected, probably thanks to a very nice injection.  This was followed by a sonar.  Every medical person who looked at me from GP to radiographers to surgeon asked the same question more than once “Are you sure that there’s no history of breast cancer in your family?”  The surgeon got me quite rattled when he referred to the lump as a mass.  2 Things did comfort me, there is no history of breast cancer in my family and the way that my symptoms manifested did not seem to fit the profile for breast cancer, although my GP mentioned that a group of inflammatory breast cancers would need to be ruled out. 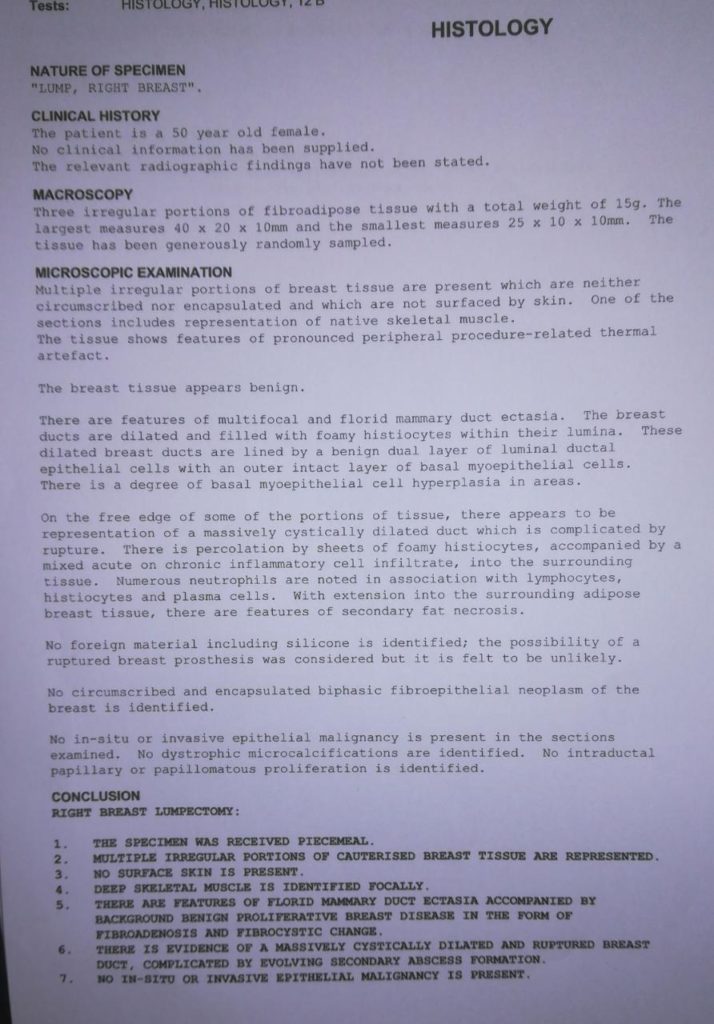 The lump was removed and sent to a lab.  After surgery my surgeon told me that what I had was called duct ectasia.  In his words, old milk in my breast ducts had pretty much rotted and bacteria had been having a party for years.  He said that there was so much muck in there that he had to clean right down to the muscle.  Now 5 weeks post surgery the scar is about 3 cm and there is a significant dent where tissue and ducts in the infected site were removed.  When I told the breast specialist this she was really cross and sat saying “RUBBISH, RUBBISH, RUBBISH”  while I recounted the above.   I left her rooms feeling so down, I have been through so much pain and stress and have been left with a deformed breast.  She said that aside from the first incorrect prescription, the lump should have been drained and I should never have had surgery, in fact the surgery may now lead to problems further down the line.

I made the appointment with the breast specialist at a breast care centre, mainly because I wanted to make absolutely sure that the same problem does not arise in the other breast.  About 6 months ago the nipples of both breasts began to invert  and both GP and surgeon suggested a link between the inversion and the duct ectasia.  Also for years I’ve had breast tenderness which I put down to hormonal changes and menopause.  I needed to rule out a replay of what I’ve been through with this.  Aside from the above the specialist answered some questions and and said the following.  For the first time I feel that I am in the best and most capable hands.

Firstly she prescribed a 30 day course of Topraz 10 which very strangely is an asthma medication.  She describes duct ectasia as “asthma of the breasts”  caused by pollutants.  She has also told me to put anti bacterial cream on my nipples every night.

She is reviewing all scans and reports today and will be sending me for another sonar and then have a follow up appointment with me.

We discussed HRT (which I have never been on) and she advised against going onto HRT, probably because she deals with many cases of breast cancer.  When I mentioned that I felt it may help with my early osteoporosis she said rather exercise and take supplements.