For years I wanted to take the children to Sci Bono but didn’t get around to it.  This school holiday I found out that they were running a Space adventures holiday program.  It looked like something that Fjord and Acacia would enjoy (and they did). 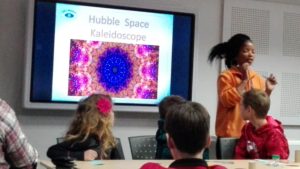 The first session was a craft activity where the children made Kaleidoscopes using mirrors and toilet rolls.  From that session we went to the planetarium (additional cost R10 each), a tent like dome where planets and stars are projected above you.  We had to slip out before the end so as not to miss the robotic rovers session. 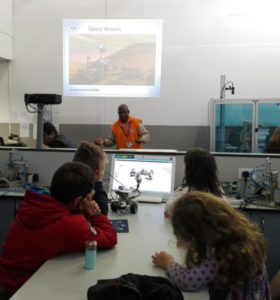 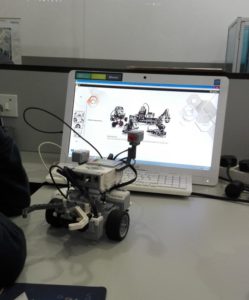 During Robotic Rovers, the children did basic programming steps to move a small robot, instructing it to move forward, reverse, turn and pick up an item.  Fjord was fascinated by this. 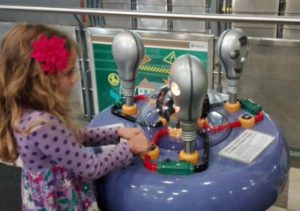 Acacia was a bit young for Robotic Rovers, I took her to play on some science stations where scientific concepts are presented in an easy to grasp format. 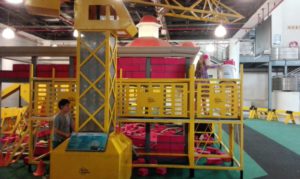 We had a light lunch at the café on the ground floor.  While waiting for our food the children played at the Murray & Roberts construction area.  This proved to be an interesting microcosm of human behaviour.  The children could be broken into 2 groups those who love to build and those who delight in tearing down.

Last was the rocket science session.  A very dynamic lady explained different means of propulsion linking to Newton’s 3rd law “For every action, there is an equal and opposite reaction.”  3 Different rockets were experimented with, the children had most fun with the last activity outside pumping air into bottles containing a little water, which then shot high into the sky.

We were at Sci Bono for just over 5 hours which passed in a flash.  The total cost was R314.  Entry R140 for 2 adults and 2 children.  R60 for activities and the planetarium and R114 for lunch.  This was exceptional value.  Not only did we have a fun educational day, there were still sections which we didn’t even look at.  A few years ago we visited the KZN science centre at Gateway in Umhlanga, many of the science stations were the same, I believe that the KZN Science centre has now moved to the old airport.  I will be looking out for programs running during future school holidays.