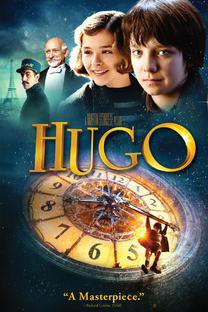 In December I was enchanted by the book The Invention of Hugo Cabret.  This week, we found time to watch the movie, Hugo.  Previously this had slipped under my radar despite winning an Oscar.

This was the first family movie which we have watched together (over 2 nights).  Parts probably went over Acacia’s 4-year-old head, but she still enjoyed it.  Georges Méliès was a very real person who played a vital role in the history of film making.  Most facts in the movie which relate to him are grounded in his fascinating life.

Only one thing jarred.  Hugo was bereft of good manners, or even mediocre manners.  Possibly this was meant to illustrate the absence of guiding parents in his life, but it irritated me.  These days many seem to find it smart or amusing when children display a lack of respect.   Even if DSTV didn’t cost the earth, we would still never get it because we don’t want the influence of cheeky American teens in our home.  No matter how much compassion I felt for Hugo, if he said to me “Give me my notebook!”  I would do nothing of the sort if the cheeky little shit didn’t say “please”.