The Zone of Interest by Martin Amis – book review 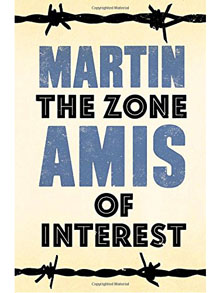 The Zone of Interest is a beautifully written, terrible book. On Goodreads I gave it 5 stars (and I’m mean with those stars) but I cannot recommend that anyone near or dear read it. At a book lovers gathering I was given the book on condition that I read it. It took over a year to meet the challenge, after the previous owner used the word ‘disturbing’ on handing it over.

I have a friend who reads the last page of a book before choosing to read it in full. I am the polar opposite, I refuse to even read the blurb on the back cover. Every book must be a fresh journey for me. It took a good few pages to realize that the setting was a Nazi concentration camp during the holocaust.

Martin Amis is an acclaimed author. This was my first experience of his work. By page 2 I was struck by his skill as a word-smith “Something happened at first sight. Lighting, thunder, cloudburst, sunshine, rainbow – the meteorology of first sight.”

Despite the evils depicted, the reader is not subjected first hand to the sickening details of terror, torture and murder. Atrocities are filtered through Nazi perspective and a Jew Szmul who is forced to commit the unthinkable on his own people. “’Either you go mad in the first ten minutes,’ it is often said, ‘or you get used to it.’ You could argue that those who get used to it do in fact go mad. And there is another possible outcome: you don’t go mad and you don’t get used to it.” The narrative spares the reader raw emotion, yet disturbs as we are forced to witness from the perspective of killers, rendering the reader feeling almost complicit in the unthinkable.

The Zone of Interest is a mirror which shows the reflection of the reader’s inner self which we do not want to see or acknowledge. Early in the book Szmul tells this tale“Once upon a time there was a king, and the king commissioned his favourite wizard to create a magic mirror. This mirror didn’t show you your reflection. It showed you your soul-it showed you who you really were. The wizard couldn’t look at it without turning away. The king couldn’t look at it. The courtiers couldn’t look at it. A chestful of treasure was offered to anyone who could look at it for sixty seconds without turning away. And no one could. I find that the KZ is that mirror. The KZ is that mirror, but with one difference. You can’t turn away.” In the last few pages, the Nazi Thomsen sums up the crux of the book. ““Under National Socialism you looked in the mirror and saw your soul. You found yourself out. This applied, par excellence and a fortiori, (by many magnitudes), to the victims, or to those who lived for more than an hour and had time to confront their own reflections. And yet it also applied to everyone else, the malefactors, the collaborators, the witnesses, the conspirators, the outright martyrs (Red orchestra, White Rose, the men and women of July 20), and even the minor obstructors, like me, and like Hannah Doll. We all discovered, or helplessly revealed, who we were.
Who somebody really was. That was the Zone of interest.”

While reading The Zone of Interest, icy cold creeps into the fibre of the reader as in the Auden poem quoted
“Saying Alas
To Less and less”.

Trying to understand the psychology of the holocaust brings every mind up against a brick wall, the horror remains utterly irrational and incomprehensible. Paul Doll, the most despicable yet comic character in the book says “”The people in the target communities
are drawing their own conclusions from an obvious and irrefutable truth:
Nobody Has Ever Come Back.  Thus they’ve put 2 and 2 together,
and we have lost the “element of surprise”…”.  “All right, I’ll phrase
that slightly differently: in the matter of what awaits these “settlers”
in the eastern territories, we no longer have the advantage of being
unbelievable.  The decisive asset of being beyond belief.”

Even the black humour in these pages is disturbing, we should not laugh, it equates to the sacrilege of dancing at a funeral. The humour somehow manages to lighten and add weight to the content.
“They claim there’s a rationale for the children, don’t they Sir?” “Yes. Those babes in arms will grow up and want revenge on the Nazis in about 1963. I suppose the rationale for the women under 45 is that they might be pregnant. And the rationale for the older women is while we’re at it.”

If you have read The Zone of Interest, please comment below, I would like to know your thoughts.

Like Loading...
book review book reviews books Martin Amis Zone of Interest 2016-04-29
sula 1968
Previous: Mother and daughter fun at the Angela Day kitchen
Next: Pregnant and Alone, I’ve been there