SANRAL have overlooked those who wanted to pay e-tolls 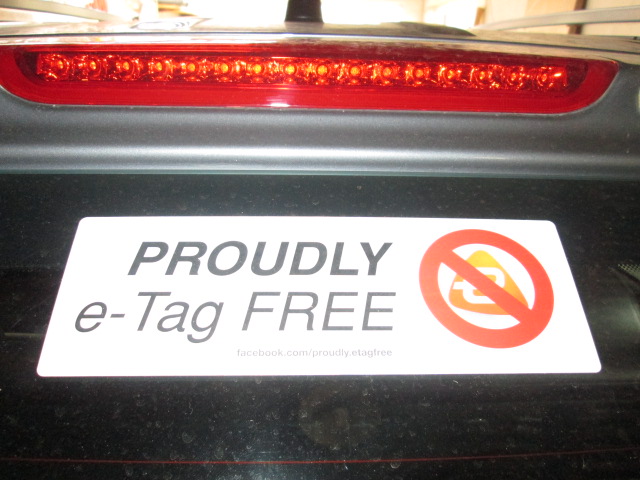 SANRAL have a long list of problems. I wonder, do they recognise the dilemma of the un-tagged motorists who want to pay but can’t.

There are drivers who are not tagged out of sheer defiance, flipping SANRAL the bird with a grin. There are another group who would like to pay, but they don’t want an e-tag. They refuse to sign the terms and conditions. A quick look at 100s of complaints by drivers with e-tags on Hellopeter is enough to put anyone off selling their soul to SANRAL.

Before e-tolls went live SANRAL threw all their energy into getting motorists tagged. They even tried to create the misconception that it was law to get an e-tag. SANRAL desperately wanted our buy-in, but it didn’t work. When the system went live only around 30% of Jo’burg motorists had e-tags. An interesting note here is that from the go-live date to now SANRAL have claimed that 1.2 million e-tags have been sold. Either they lied or no-one bought an e-tag over the past year.

Now what about those who intended paying on invoice?

E-tolls went live on 3 December 2013, in many cases the first e-toll bill incurred was when motorists left the province going on annual vacation. By the time they returned home, the 7 day grace period had lapsed and insane amounts were owed in un-tagged tariffs. Many months later, the grace period was said to have been extended but never implemented by SANRAL and so was still no help with regard to those first bills.

That first December, a glut of debt collecting sms’s were sent out by the Violations Processing Centre (VPC), a division of SANRAL. These provoked great ire and mistrust. Social media was abuzz with stories of inaccuracy. My daughter received a sms stating that she owed R271, when her car had not yet passed under 1 gantry.

In February 2014, there was a postal strike in parts of Johannesburg which went on for about 2 months. Followed later in the year by another longer strike. Almost every invoice received, arrived long after the payment discount deadline, if it arrived at all.

When invoices did arrive they were riddled with errors and the issue of cloned number plates highlighted a widespread problem. The consumer complaints commission stated that for the photographs on the invoices to be valid they would need to be geotagged, time and date stamped. The widespread opinion seems to be that the current invoices would not stand up in a court of law.

SANRAL insist that those who pay must pay the earliest invoices first. If a motorist has a query on their 1st invoice they cannot pay the 2nd, or any subsequent ones. Or, in some cases companies are prepared to pay tolls when a private vehicle is used for business purposes. If the individual has not paid that 1st private invoice, he cannot pay the ones which the company would reimburse.

Now over a year has passed since e-tolls went live and for those who started out not paying, there is no turning back. They ‘owe’ too much. The debt is too great to settle. Those who started out with the intention to pay are forced into a position where they can’t. SANRAL seem oblivious to their plight and this will be yet another nail in their coffin.

For a bit of fun reading here is an extract from a complaint on HelloPeter  “I have twice in the last couple of weeks tried to pay e-tolls and have found absolute incompetency and a company who’s systems are in horrible disarray. Sanral say you pay a lower rate if you pay within 7 days but then make it just about impossible to actually pay within this time-frame.

– The first time I tried paying within 7 days it was apparently in the window of the 7th day and the bill was in the process of being handed over to a ‘VPC’ department. Apparently while this is happening it is impossible to actually pay your e-tolls. So if you use an e-toll route every day and go pay your bill after 7 days there will be missing transactions for day seven. You will think you have settled your account but you have not! How the heck in this day and age a company can come up with such a stupidly designed system is beyond me.

– The second time I tried paying I made sure I was within 7 days. This time the lady calmly looked me in the eyes and said you can only pay VPC bills and not transactions within 7 days. A blatant lie.

So now with tears in my eyes I ask you. HOW DO YOU ACTUALLY PAY YOUR E-TOLLS???  “