UnGrinching the Christmas Spirit through the Santa Shoebox Project

Me, Heath and Reza at the Santa Shoebox warehouse

Tis the season to feel grumpy.  Drowning in a tinsel tsunami, every shop is decked in obscene materialism, shouting blasphemy, I don’t picture baby Jesus in a manger, I envisage a furious Jesus, upending merchants tables in the temple.  Tons of shitty plastic toys will end up as litter.

Just as festive season dread invoked rising bile, along came the Santa Shoebox Project.  I’ve seen references to the project before but not had enough information to participate, and didn’t expend a little effort to discover how easy it is to get involved.  I now know that I could have pledged a box easily online and delivered the full wrapped box and one of many drop off points.  I could even have pledged a virtual shoe box where Pick ‘n Pay would have done everything for me. 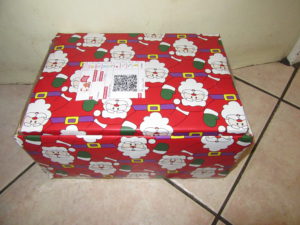 Our children’s school made it easy for me.  I was given a box (you normally supply your own) and the details of Oratile, a 5 year old boy, who we filled the box for.  All boxes go to underprivileged children, predominantly in orphanages.

How to pack a Santa Shoebox

Being me I lost the instructions and almost wrapped our box closed, until Cliff told me that he heard on the radio that boxes must be wrapped in a manner that they are not sealed (it is best to pull and elastic band over the wrapped box to ensure that contents don’t fall out). 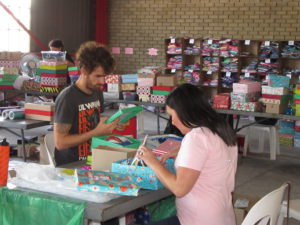 Yesterday it was a privilege to volunteer at the Santa Shoebox warehouse with Reza our PTA chair and my eldest son Heath.  Our task was to check box contents, ensuring that all items were in the boxes and that no inappropriate items were in them. 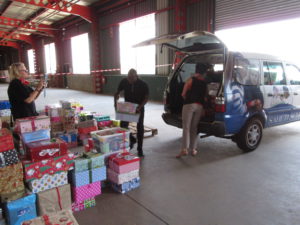 Deliveries arrived throughout our time at the warehouse

Later at home I looked at the Santa Shoebox Project website and officially filled in the volunteer form, I want to be more involved in future.  These pictures on their Facebook page brought tears to my eyes. 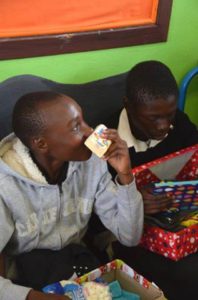 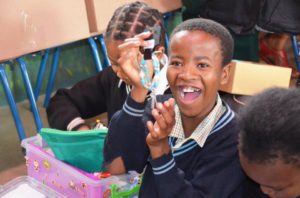 The Santa Shoebox Project brought home the true essence of Christmas.  It added a depth of appreciation for all that we have and take for granted.  In a political week of the bad, the worse and the ugly it warmed my soul and restored faith in humanity.  It gave me a special time with my son, the memory of which will endure forever.  Thank you to the wonderful people who make this project happen, you are an inspiration.