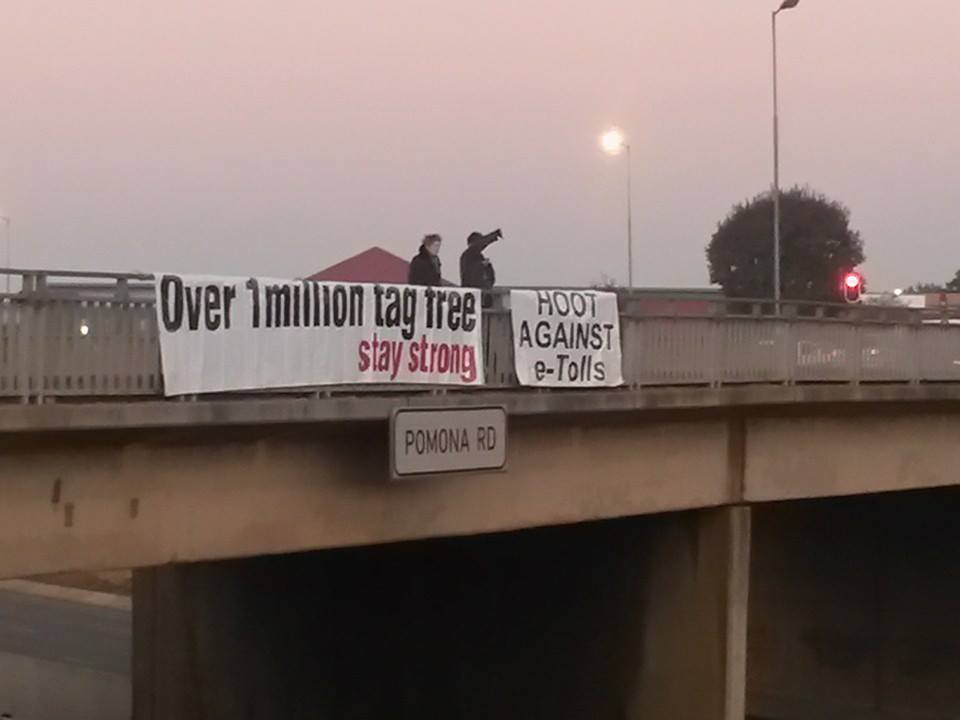 Anyone who knows me, knows that I have a big issue with SANRAL and the e-tolls which have been implemented in Gauteng.  I won’t go into my feelings about the system here.  Through social media I have ‘met’ many people who have taken up the fight against this system.  I have already written a piece about the unifying effect which e-tolls have had across every usual social barrier, SANRAL make my blood boil but the camaraderie amongst those in opposition is heart warming.  Until today I had not met any members of the various protest groups from social media.  These groups include BAT (bikers against e-tolls) – 13 331 members, CAT (cars against tolls) – 5256 members, Proudly e-tag free – 8097 members, and 1 million motorists refuse to pay e-tolls – 120832 likes.  BAT have held several protest rides against e-tolls.  CAT and Proudly e-tag free hand out bumper stickers and all groups work in unity spreading awareness to counteract the misinformation propagated by SANRAL.

On the social media sites I was made aware that a new protest initiative started about 3 weeks ago, in the form of banner protests over freeways.  This was initiated by a man known as Mr T and snowballed from there.  The slogans on the banners read “Hoot if you are against e-tolls”, “Over 1 million tag free, Stay Strong” and “Proudly E-Tag Free”.  More and more people around Gauteng are pitching in to get involved with these protests.  These dedicated people set up banners at sunrise (rather uncomfortable in Jo’burg winter) for morning peak hour traffic and again in the afternoons.  They are people with jobs, familys and many commitments, yet they are committed to being part of the fight against e-tolls.  The first protest was held on Linksfield Rd and since then there have been many across Gauteng.  Last Friday I passed the team with a banner on Beyers Naude Rd.  I decided that I wanted to get involved and was directed Cynthia who has been hands on from the start.  She suggested that I get a team of about 6 people together, we would get banners and support from those who were already involved. 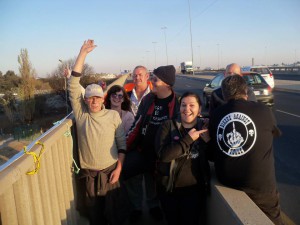 Today was the first banner protest by our new team which consisted of some seasoned veterans from other teams and others like myself who were there for the first time.  As we walked onto Rondebult bridge over the N12 with our banners some cars started hooting before we even hung them.  We were on the bridge for 3 hours and we had a blast!  I loved meeting the people who I previously only encountered on my computer, but more I loved the energy created by the passing traffic.  A police car even signaled support.   If you want to get involved pop onto one of the links to the social media pages or when you see a banner, HOOT!